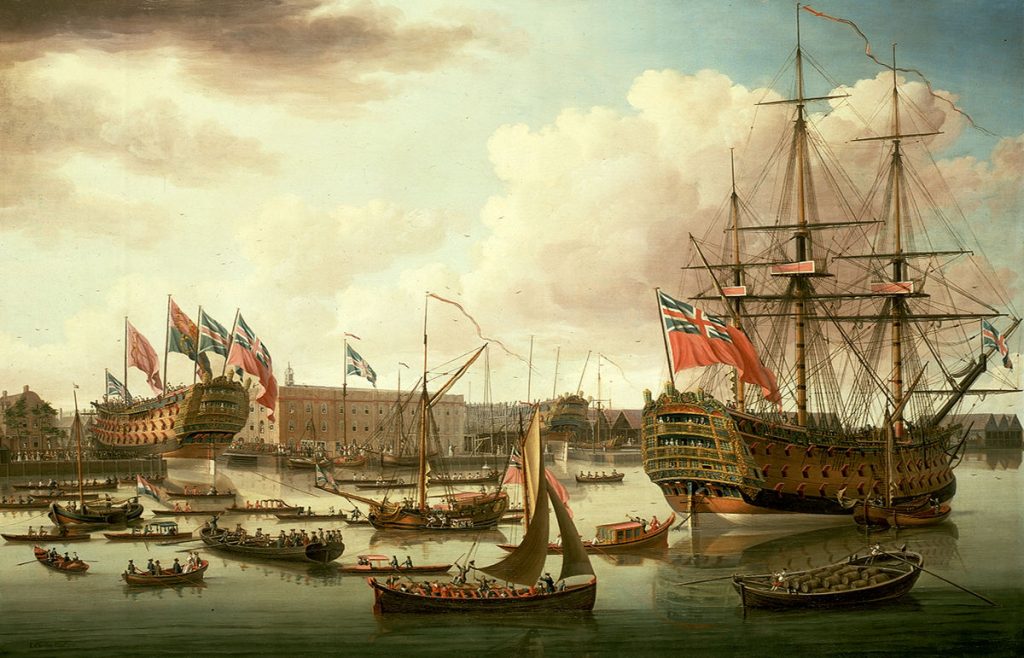 Chatham was mainly concerned with the construction of warships but also built the troopships and store ships that transported Britain’s armies across the world together with their stores of food, ammunition and other vital supplies. In times of war, merchant ships were also requisitioned for military purposes and the East India Company was a principal builder and supplier of these vessels from its shipyards at Deptford. 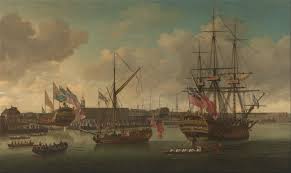 Employment at Chatham was never stable but key tradesmen usually had work. These included the shipwrights who were responsible for construction and the mastmakers, caulkers, joiners and sailmakers who represented the specialist trades. In addition, the rope yard and works played a special part in the outfitting of the ships, along with the iron founders who manufactured the ship’s cannons at the world’s largest iron-works in Falkirk.

Ships of war were rated by the number of guns they carried from a first-rater like the Victory with three decks and 100 guns; a third-rater with 74 guns and frigates, the Navy’s workhorse with 32 guns. The latter were highly manoeuvrable and much sought after by ambitious young captains.

As the need for warships grew, so did the Dockyard and throughout the eighteenth century facilities were improved that included dry/graving docks, an anchor wharf store, sail and rope lofts and hemp house as well as accommodation for officers and administration. Chatham town expanded alongside the Dockyard with thousands of labourers emigrating from Deptford, Greenwich and Limehouse as well as nearby Rochester.

In addition to victualling and supply, each of which needed their own organisation and management, in 1664, the first Maritime Regiment of Foot was established and Chatham became its base for the next 300 years.

Perhaps the most remarkable innovation was the industrialisation of production in the dockyards.  A warship required the timber from over 4000 oak trees and 60,000 nails. 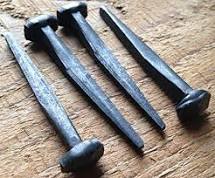 Traditionally, these were made one-by-one on the dockyard’s forges but this rate of production would be quite inadequate for the circumstances. Instead, the Dockyard produced a standard nail and distributed the example to blacksmiths throughout the South of England. Every village had a smithy and every local blacksmith was commissioned to produce 5,000 nails to the standard sample they had received. This multiplied production many times and enabled the Dockyard to maintain its production rate.

Even more extraordinary was the mechanisation of the production of blocks. These were an essential piece of equipment for the sailing of ships and over 900 were required for each first-rater. Chatham alone needed 10,000 each year. Formerly, these had been carved laboriously by hand, but Marc Brunel, a French émigré, had invented a series of machines powered by steam that could be placed in line to manufacture the blocks. This was revolutionary as were Brunel’s improvements for the handling of timber stocks at Chatham when he introduced steam-powered machinery to handle and cut over 12,000 tons of timber that was imported from overseas annually.

First, a covered shed was built with logs floated off the Medway along a 250 foot canal. Then timber was lifted by a steam-powered winch onto the saws and cut mechanically before being removed to store via an overhead rail system. Before the Napoleonic wars began, whilst there was some ship-building in progress, the main activity of the Dockyard was the maintenance of the Fleet. There was extensive anchorage off-shore where the ships were kept and called forward for maintenance on a regular basis. At the outbreak of war, these ships were surveyed, re-coppered, re-masted and re-rigged ready for sea.

The other main was finding crews for the ships. Whilst the area’s population were often experienced sailors and crewmen, the Navy could never find the numbers needed so that they had to resort to the hated Press. Press gangs made up of an officer, bosun and senior crew, roamed the streets at night and entered port-side and town taverns looking for victims. Any able-bodied male was liable to be seized and there was no redress in law. They simply disappeared from their homes and were forcibly taken on board to serve at His Majesty’s pleasure for the duration.

From 1793 onwards, the Dockyard was under constant pressure to provide the Fleet with its wartime needs. This was not only to increase Fleet numbers but also to replace losses from enemy action and natural disaster, shipwreck, etc. With Royal Navy ships stationed throughout the world, the Dockyard worked at its fullest stretch.