The principal points of departure for an escape attempt would be from the United States of America, via Ascension Island, Bahia, Montevideo or Buenos Aries.

Ascension Island was heavily defended by the British against possible French incursion but further south, revolutionary movements were threatening the rule of Span and these provided fertile ground for the support of an escape (See also, The British Invasions of South America in the Oceans of the Empire topic).

In 1817, Sir Hudson Lowe, who by this time had become almost paranoid about the dangers of Napoleon’s escape (see Sir Hudson Lowe and From the Records in the St Helena topic), recorded in his diary two of the best developed escape plans to have been uncovered. The first of these was reported to him from Philadelphia through diplomatic channels.

The plot involved taking Napoleon off St Helena by boat which would be carried out by French ex-officers in the USA. Two sailing ships would be hired and officers and men recruited. The rescue would be made out of Baltimore and would be joined by Lord Cochrane. Admiral Sir Thomas Cochrane was a well-known British naval commander of the Napoleonic wars who had led the cutting out and burning of the French fleet at Toulon. The rescue flotilla would meet off the coast of Brazil before sailing to St Helena.

The second plot was reported to the Foreign Secretary, Lord Castlereagh, by a British merchant travelling in South America.

A ship would sail from Rio de Janeiro carrying a number of small steam boats on its decks which would be lowered into the water offshore of St Helena before landing a party that would attack Longwood House and free Napoleon.

As a result of these reports, the Island Naval Squadron on St Helena was placed on high alert and shortly afterwards it was reported that an American schooner had been sighted circling around the island. Initially, the vessel flew the red ensign of the British merchant marine but when it was pursued by a ship of the squadron out of Jamestown Roads, the schooner provocatively raised the Stars & Stripes and sailed away westwards. 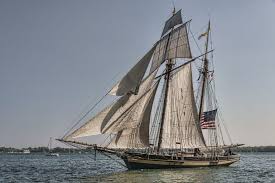 It was suspected that the vessel was the notorious privateer The Damned Yankee infamous for sinking British shipping in the war of 1812 (see The War of 1812 on the Chesapeake in the South Atlantic topic).  The involvement of the Yankee out of Baltimore raised another rumour that persisted throughout the time of Napoleon’s exile and imprisonment which was that of escape by submarine.

Submarines had enjoyed a mythical reputation for many centuries. Aristotle (c. 384-322BC) wrote of Alexander the Great using submersibles during the siege of Tyre. The Astronomer Royal, Edmund Halley (1656-1742), who, by a strange co-incidence, spent two years on St Helena mapping the stars of the Southern hemisphere, developed a viable diving bell in 1691. Bushnell’s Turtle, built on the USA in 1776, had been the first to carry underwater explosive charges and Thomas Johnstone (1772-1839), a British sailor and smuggler was also rumoured to be building a rescue vessel.

Robert Fulton (1765-1815) had invented his Nautilus submarine in 1800 during the Napoleonic wars. It was designed to attack shipping from underwater. Fulton’s career had been chequered. He left America and trained originally as a landscape painter in England before studying engineering under James Watt.

He was a brilliant and innovative engineer but her made impossible demands on the naval budgets of America, Britain and France during the Napoleonic wars by insisting that he should be paid all his development costs, a lump sum for his finished product and a percentage of the value of all enemy naval and commercial shipping and their cargoes captured or sunk. 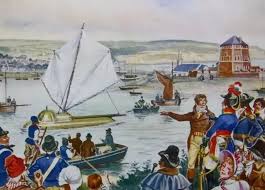 A prototype of his submarine was built at Rouen and demonstrated in front of Napoleon on the Seine in Paris but Fulton’s terms were unacceptable.

The Nautilus had a cigar-shaped design surmounted by a conning tower, behind

which a collapsible mast was fitted. When not under sail, the vessel was driven by an internal wheel and pin, four-bladed propeller shaft. A flooding compartment at the bow pumped water in and out of a ballast tank and vertical and horizontal rudders steered the vessel. The Nautilus had a crew of three and could stay under water for up four hours.

However, Napoleon, furious at his treatment by the British during his exile on St Helena, claimed that he would only leave the island on the full-dress uniform of a Marshall of France. This suggested that he expected that he would be released from exile and imprisonment with full honours which was never going to happen.

Sir Thomas Cochrane, the notorious British Navy captain and hero of the cutting out of the French Fleet at the Battle of the Basque Roads, was the model for the Jack Aubry adventure novels, including, Master & Commander, written by the author Patrick O’Brian.