The bridges at Berezina

Meanwhile small bands of Cossacks harassed the retreating army continually. As men fell behind they surrounded the stragglers and cut them off before slashing them to death from the saddle. Anyone left alive dragged themselves painfully after the retreating columns. They stained the snow with their blood and cried out for help.

Small groups of French cavalry did their best to head off the enemy attacks. For each man who was saved, thirty more were slaughtered. The men left alive began to look like ghouls. Their feet were wrapped in rags. Their uniforms were torn beyond recognition. Their greatcoats were tied with string. Typically, a man’s head was wrapped in a filthy cloth. His nose was almost frozen off. His ears were covered in wounds. A number of his fingers and thumbs missing.

By the time the retreating army had reached the Berezina, the last obstacle before the frontier, the Grand Armee that had originally numbered over 450,000 men was now been reduced to fewer than 28,000.

Those who escaped owed their lives to the Swiss Corps of Engineers. Up to their necks in the half-frozen river, they built the pontoons over the Berezina across which the army could reach safety. Even so, many men who had reached that far, were drowned in the crossing when sections of the pontoons collapsed.

Soon after crossing, Napoleon and his personal staff left for Dresden. By the end of December they reached the city from which they had started. Napoleon and his party had frequently been attacked by Cossack bands. On one occasion Napoleon had shown an ADC a phial of poison that was hung from a ribbon around his neck. He had sworn that he would never be taken alive .

When he arrived on St Helena Napoleon maintained a strict policy that he would never contemplate escape. He would only ever leave the island on his release from imprisonment by the Allies. He would be in the full-dress uniform of a marshal of the Grande Armee.

Napoleon’s reputation in France, whilst enjoying a brief renaissance before Waterloo, never recovered from his defeat in Russia. His beloved soldiers, who he had led to victory on so many glorious occasions, never fully trusted him again.

Napoleon and retirement on the island of Elba

Napoleon Bonaparte returned to France expecting to resume his position as Emperor of the French. However, the mood in the capital had changed. His extravagant waste of blood and treasure in the campaign in Russia was used as the reason to depose him. The man who had ruled the European continent for years was let off lightly. Napoleon was given the opportunity to retire to Elba, the island of his birth, as sovereign for life.

Napoleon always claimed that he would never have been sent to Elba if it had not been for Marmont who had betrayed him. Marmont had transferred his allegiance and the men of his army to Blucher and the Allies. It became clear that he would not be a prisoner for long.

Once the French people had experienced the restored Bourbons, Napoleon began to receive emissaries begging him to return to France and resume his role once more. In a show of bravado Napoleon and a few of his retainers escaped from the Elba. They sailed to Frejus on the south coast of France and gathered an army around him once more. He travelled northwards into France as more and more troops rose in his favour with the rallying cry of ‘Paris or die!’

In June 1815 Napoleon faced the Allied armies at Waterloo. It has been claimed that he was not himself that day. He spent most of it in his carriage suffering from a severe attack of piles. In any event, Napoleon’s command of his troops on the battlefield drifted. He allowed his generals too much scope. By nightfall Napoleon’s army was in full and disorderly retreat. Napoleon himself was fleeing towards the French border and on to Paris. Here, his intention was to form another army from reserve forces and roll back the Allies once more.

Bonaparte’s arrival in Rochefort and Torbay 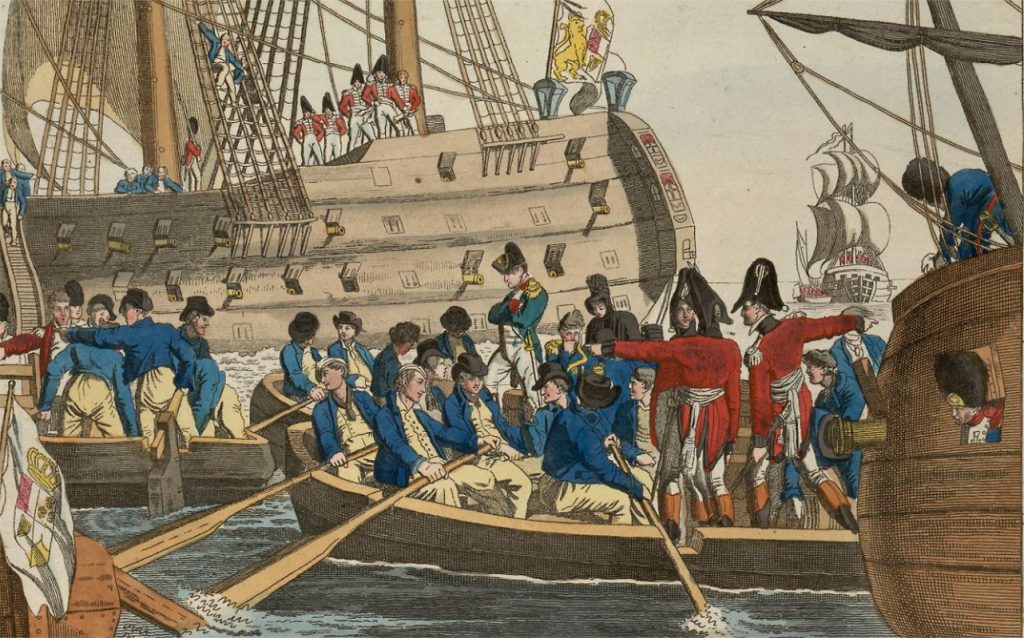 However, it was not to be. After brief negotiations in Paris, on 22nd June 1815, Napoleon abdicated. He handed over power to the national Assembly led by his ex-head of the secret police, Fouche. He left Paris on the 25th.

What next for the Emperor? His first choice was to go to America where he imagined that he would find sympathisers throughout the country. It was also where his brother Lucien had settled. He arrived at the French port of Rochefort on the Atlantic coast. He went on board the French Navy’s frigate Saale on which he intended to make his escape.

However, feelings in Paris were moving against him. He decided that he should obtain a licence from the Assembly that would secure his safety while his ultimate destination could be agreed.

Meanwhile, the British Navy was intent on his capture. Its naval vessels were blockading the approaches to the port. Then it seemed as if escape to America would be impossible. The Assembly’s hostility was now turning towards trail and execution. Napoleon began to feel that his best chance might be with the British. He therefore sent a message to the commander of its nearest ship, HMS Bellepheron, known to its crew as Billy Ruffian, Captain Maitland commanding, and appealed for sanctuary.

The French licence to depart France never arrived. The newly installed Bourbon government were not going to allow him to get away. Britain offered the only way out and Napoleon believed that they would deal with him fairly.