Napoleon on board the HMS Bellepheron

On 15th July, Napoleon went on board HMS Bellepheron. He wore an olive green sur-coat and green uniform with scarlet cape. A gold sword hung at his waist and he wore his famous tricorne hat with tricolour cockade. 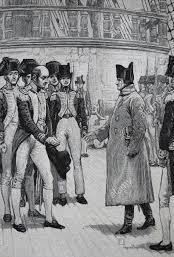 On 16th July the ship sailed for England and arrived off Dartmouth on the 23rd July. Captain Maitland had no authority but to transport Napoleon to England. He had no orders to carry on any kind of negotiations with the Emperor. However, even before their arrival off the coast, Napoleon was plotting to parley with the Prince Regent. He composed a letter asking that he be treated not as a prisoner of war but as an honoured guest of the British.

He said that he wanted nothing more than to be allowed to retire into the English countryside and live the life of a gentleman. His letter was not taken to London and was not seen by the Prince. Over the following days, whilst Bellepheron sailed towards Plymouth, Napoleon made many attempts to alleviate his situation. Unknown to him, the British Government had already decided on St Helena. St Helena was ideal. It was remote, inaccessible and rescue would be impossible. On the 31st July the ship reached Plymouth. As soon as news got out that Napoleon was on board, a great armada of small boars set out. They surrounded Bellepheron in the hope of catching a glimpse of the ogre that was Boney.

On 6th August a much larger vessel appeared next to the ship. This was HMS Northumberland and Napoleon was informed by Rear Admiral Sir George Cockburn that they would shortly be leaving for the South Atlantic.

Cockburn had taken part in the war of 1812 on the Chesapeake and been present at the burning of the White House (See the War of 1812 on the Chesapeake in the Vive L’Empereur! Section of the website). Cockburn commanded a fleet of eight ships that would go down to St Helena. It  included three troop ships in which the 53rd Foot, who would form the first garrison, would be travelling.

On 7th August Napoleon was transferred to Northumberland complaining bitterly of his treatment. The British had betrayed his good intentions and his wish to become their guest. Instead of which, he claimed, he was being made a prisoner and exiled to that godforsaken island. He made his objections known to Sir Henry Bunbury, Under-Secretary at the Home Office. Sir Henry, representing the British Cabinet, had served with distinction in Wellington’s army and was close to the Government.

The Northumberland was a much larger ship, a 74 gunner Third Rater with more space and facilities for a long voyage. However, the ship was crowded. Napoleon’s household suite, who were going into exile with him, took up much of the available space.

Napoleon complained at the small cabin that he had been allocated that measured 12×9 feet. The ship sailed almost immediately on the 8th August. It would make its  long journey South lasting ten weeks.

On 27th August the Northumberland passed Tenerife. On the 29th September she crossed the Equator and on 15th October reached Jamestown Roads at St Helena. Napoleon Bonaparte’s journey into exile on St Helena was complete. He would never return.