The contest that now took place set the British Government and its, mainly, Protestant clients in opposition to the United Irishmen movement and its leaders.

Initially, a number of attacks were organised, mostly at night, on the houses of the gentry to acquire arms and on 30th March 1798, the Dublin Parliament persuaded the Government in London that a state of rebellion existed throughout the country. This amounted to a declaration of war against the forces of the United Irishmen.

General Abercromby, the Commander on Chief urged the government to respond cautiously, with the handing over of rebel arms being sufficient to restore peace. In a foretaste of what was to come, Abercromby described in a confidential report that his troops were ‘formidable to everyone except the enemy’; that the infantry had ‘little or no discipline’ and that the cavalry was ‘unfit for service’. The report was leaked and the C-in-C was overruled by hardliners in Dublin and forced to resign.

The rebels now attempted to seize Dublin itself but were prevented by more than 4,000 troops who occupied key points across the city.

The action then switched to smaller cities, towns and villages where rebel columns attacked garrisons for arms. The most successful of these was at Wexford where the garrison was overwhelmed. A republic was declared based on French revolutionary principles and a new world began to be created of equality and democracy for all.

In the course of the campaign, atrocities were committed by both sides when soldiers and militia surrendered to the rebels and when Government forces retaliated. A particularly vile form of torture was the practice of ‘capping’ when a prisoner’s head was coated with tar and set alight. Another form of murder was ‘pitch-forking’ when a prisoner was thrown into the air and pitch-forked to death.

Slowly but surely, however, the Government’s forces took back control. Few of the rebel leaders had military experience and quarrelled amongst themselves about tactics. Almost none of the rebel troops were trained infantrymen and were mostly armed only with pikes or scythes fixed to the end of long staves.

During counter-offensives, Government soldiers bayoneted and shot captured and wounded rebels making little distinction between combatants and civilians. At the Battle of New Ross, as Government troops tried to re-take Wexford, the rebels set fire to a barn inside of which were wounded prisoners, women and children, all of whom were killed.

At the end of June, Government forces led by General John Moore (later to die at Corunna) re-took Wexford and the rebel armies retreated to the safety of the mountains in the West where they now planned to join up with their co-insurrectionists in Ulster.

Rumours began to circulate of the long-awaited second French invasion fleet setting sail and if there had been any doubt about the seriousness of what was going on in Ireland, the Government in London now appreciated the scale and intensity of the Jacobin threat.

On 14th July 1798, two expeditions set off from France, from the ports of La Rochelle and Brest. Commanded by General Humbert the invasion fleet carried arms and ammunition for the rebels in addition to Napoleon’s French troops. 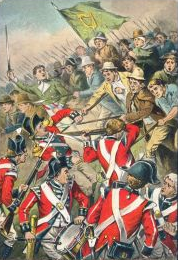 The French fleet out of Brest failed to sail when the port was blockaded by the British but on 22nd August Humbert’s forces landed in County Mayo on the west coast of Ireland. On a beachhead ten miles deep and with 6,000 men at his disposal, Humbert moved inland and attacked Castlebar, the county’s capital still held by the British.

General Lake mustered over 8,000 men and took on the French defeating them at Ballinamuck where Humbert and his French troops were captured, Meanwhile, a third French invasion force of 3,000 men finally managed to leave Brest and sailed into Rutland Bay in County Donegal. However, when they learned of Humbert’s defeat, they sailed away again.

The threat of a seaborne invasion was ended and the rebellion in Ireland drew to a close. Reprisals continued well into the following year but the events of 1798 that had been marked by the savage behaviour of British troops and the brutal repression of the Irish population, left behind a legacy of hatred for their English occupiers.

The British Government decided that a principal source of trouble had been the behaviour of the Dublin Parliament and its members. In 1800 it was abolished and ideas of separatism and republicanism were suppressed for more than 100 years.

The growing economy of the British Empire brought better times to parts of Ireland, especially in Ulster, whilst in the South the effects of the dreadful famine between the years 1845-1849 brought only more distress. The consequences of British actions in the eighteenth and nineteenth centuries and especially the brutal repression of the rebellion in Ireland would not be fully realised until the twentieth century.