As the Company in India conquered more lands and levied more taxes, there were two men who, each in their turn, epitomised both the success of the enterprise in India and the jealousy that it generated in London. Robert Clive (1725-1774) was born at Market Drayton in Shropshire and arrived in India in 1744. 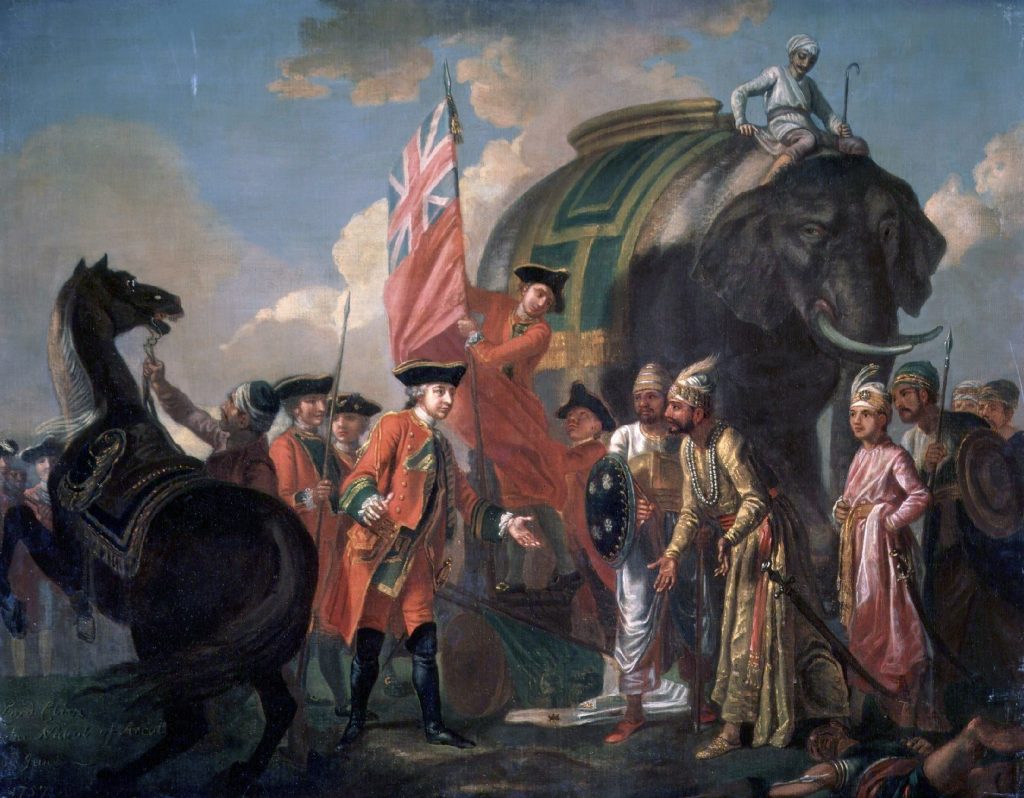 He worked as a writer in the customs department at the Company’s headquarters in Madras. He was restless and ambitious at a time when Britain’s
future in India was uncertain and its foothold on the sub-continent was insecure. His rise to power in India came from his innate ability and extraordinary foresight as well as being in the right place at the right time. Clive volunteered to defend the British base at Fort St George against French attack and then transferred into the Company’s military arm, a small force of European and Indian soldiers, called sepoys.

Clive became famous in Britain for his defence of Pondicherry against French attack and at the siege of Arcot against the Moghul emperor. In 1757 Clive faced his greatest challenge when his inferior forces faced the Nawab of Bengal at the Battle of Plassey on the Hooghly river. Clive had 1,100 Europeans and 2,100 sepoys under command against the Nawab’s 50,00 foot
and 18,000 horse. Clive had already subverted a number of the Nawab’s key allies who deserted the field and this ensured his defeat.

Thereafter, Clive’s name became a by-word for treachery and corruption. The great men of India hurried to pay protection money to the Company and to Clive personally.

When asked about his wealth Clive used to say that he was astonished by his own moderation. He died by his own hand in 1774, probably while taking drugs.

As Clive was self-centred, mercurial and generous, Warren Hastings was his opposite. Hastings was moderate, patient, kept his own counsel and was nourished by the love of Marian, his wife and of learning. He was the first of the British rulers in India who took a genuine interest in the culture of the continent and did his best to understand his subjects – for that is what they were, whatever London or Bombay claimed to e otherwise.

With Clive, Hastings laid the foundations of British rule in India, first in partnership with his mentor and later as Governor-General. Hastings was born at Churchill in Oxfordshire and educated at Westminster School. He joined as a clerk or writer and sailed for India in 1750.

Hastings was first made the Resident and then Ambassador to the Nawab of Bengal and it was during this time that he began to immerse himself in Indian culture.

Hastings witnessed the venal behaviour of the Company’s officials and was determined to reform its system of governance. This set him against its senior officers both at home and in India and led to his impeachment on trumped up charges of corruption by Parliament which lasted for many years. All charges were finally dismissed and as Hastings left the Commons Chamber for the last time, its members stood and applauded his staunch defence.