The Northumberland sails into Jamestown Roads

When the news reached the town that Napoleon was on board the Northumberland, one of the ships of the flotilla that had just been sighted entering Jamestown Roads, wild excitement broke out. At The Briars, Betsy’s father, William, loaded Betsy and her elder sister Jane, into their dogcart and set off for the port. He had just received the first news that anyone had received that Napoleon had been exiled to St Helena and was on the ship. A letter addressed to William by his patron, Sir Thomas Tyrwitt, was also on board that provided more details of the British Government’s decision but Balcombe would only receive this a few days later. However, Balcombe’s card had already been marked. 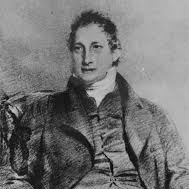 He was the ex-Naval officer and orphaned son of a naval captain who had been mysteriously drowned in a yachting accident while sailing with the Prince of Wales, the Prince Regent. As a result, he had been raised under the patronage of the Royal Household and had powerful friends (See Civil and Military in the St Helena theme).

Betsy was by all accounts a lively girl. But she was a lot more than that. Betsy was precocious to say the least even in an era when it was quite usual for 14-year-old girls to be married.

She was a rumbustious girl and the same time as being a coquettish your woman and she wrapped Napoleon around her little finger. He had had always been a lady’s man and like many powerful men had enjoyed the company of women throughout his career.

A number of eligible if married women had travelled down to St Helena on the Northumberland who were married to members of Napoleon’s suite and it is even rumoured that one of these bore his child but none of these had the same place in his affections as his Betsy. I suppose she was unthreatening as a permanent attachment and Napoleon felt that he could relax in her company.

They certainly got up to lots of japes together! 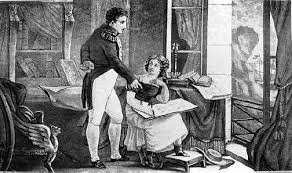 There were many occasions when Betsy and Napoleon managed to annoy everyone and create chaos around them including their appearance at dancing parties; at the race course on Deadwood Plain and in the gardens at Longwood.

These episodes usually involved Betsy teasing Napoleon until his patience snapped and he reacted by pulling her hair or hiding her clothes. The best-known example of this was when Betsy borrowed Napoleon’s sword and started brandishing it about in front of his face in the garden. His companions thought she was going to kill him and there was a serious row which led to Betsy’s father being obliged to apologise and being instructed to control her. Since the event, it has been impossible to reach anywhere near the truth of the relationship between Napoleon and Betsy because she made a lifetime study of defending her hero at every opportunity in her writing.

In the battle of reputations, Sir Hudson Lowe had no chance against such an attractive opponent and Betsy exploited every advantage. There was just too much weight of opinion in her favour.