There were many ditties and songs of the French Revolutionary and Napoleonic wars that the British soldiers sang in their camps on St Helena. There are a selection below along with accompanying music. 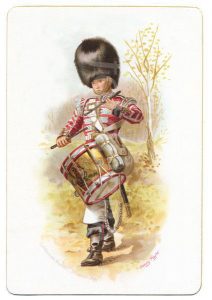 As sweet Polly Oliver lay musing in bed
A sudden strange fancy came into her head
Nor father nor mother have I either now
I’ll list as soldier, and follow my love.

So early next morning she softly arose
And dressed herself up in a drummer boy’s clothes
She cut her hair close and she stained her face brown
And sailed for a soldier to fair Lisbon town.

Then up spoke the sergeant one day at his drill
“Now who’s good for nursing? A drummer boy he’s ill”
“I’m ready”, said Polly. To nurse him she’s gone.
And finds her true love all wasted and wan.

The first week the sergeant kept shaking his head.
“No nursing, young fellow, can save him”, he said.
But when Polly Oliver had nursed him to life
He cried You have cherished him t’was if you were his wife.

But then Polly Oliver, she burst into tears
And told the good sergeant her hopes and her fears
And shortly thereafter for better or worse
The drummer took joyfully is pretty soldier nurse.

by the Newman & Oltman Guitar Duo from the album Laments & Dances,
Music From The Folk Traditions – available to purchase from Amazon. 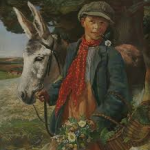 The sun had set beyond yon hills,
Across yon dreary moor,
Weary and lame, a boy there came
Up to a farmer’s door
‘Can you tell me if any there be

That will give me employ,
To plow and sow, and reap and mow,
And be a farmer’s boy?

‘My father is dead, and my mother is left
With five children, great and small;
And what is worse for mother still,
I’m the oldest of them all.
Though little, I’ll work as hard as a Turk,
If you’ll give me employ,
To plow and sow, and reap and mow,
To be a farmer’s boy.

‘And if that you won’t me employ,
One favour I’ve to ask, –
Will you shelter me, till break of day,
From this winter’s blast?
At break of day, I’ll trudge away
Elsewhere to seek employ,
To plow and sow, and reap and mow,
And be a farmer’s boy.’

‘Come, try the lad’, the mistress said,
‘Let him no further seek.’
‘O, do, dear father. The daughter cried,
While tears ran down her cheek
‘He’d work if he could, so ‘tis hard to want food,
And wander for employ;
Don’t turn him away, but let him stay,
And be a farmer’s boy.

And when the lad became a man,
The good old farmer died,
And left the lad the farm he had,
And his daughter for a bride.
The lad that was, the farm now has,
Oft smiles, and thinks with joy
Of the lucky day he came that way,
To be a farmer’s boy.

Over the hills and far away

Here’s forty shillings on the drum
To those who volunteer to come,
To ‘list and fight the foe today
Over the hills and far away.

Through smoke and fire and shot and shell,
And to the very walls of hell,
But we shall stand and we shall stay
Over the hills and far away.

Though I may travel far from Spain
A part of me shall still remain,
And you are with me night and day
Over the hills and far away.

If I should fall and rise no more,
As many comrades did before,
Ask the fifes and drums to play
Over the hills and far away.

by Mark Pidgeon from the album Sold Down The River
available to purchase from Amazon. 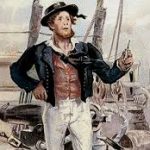 Now the first land we made it is called the Deadman
Next Ram Head off Plymouth, off Portland the Wight
We sailed by Beachy, by Fairlee and Dungeness
Till we came abreast of the South Foreland Light

Then the signal was made for the grand fleet to anchor
All in the Downs that night for to lie
Then it’s stand by your stoppers, see clear your shank-painters,
Haul all your clew garnets, let tacks and sheets fly

From Roast Beef of Old England by Jerry Bryant and Starboard Mess
available to purchase from Amazon.