Napoleon in exile on St Helena, guarded day and night.

The Administration of St Helena during the time of Napoleon’s exile and imprisonment was divided broadly into those engaged in civilian activities, for example, the cultivation of the East India Company’s gardens and those engaged on military duties.

The British had acquired the island from the Portuguese as a re-victualling point for ships sailing on the long sea route to the East and before they had captured and occupied the Cape (See also ‘The British Invasions of 1806 & 1807’ in the Empire of the Oceans topic and ‘The Island of St Helena’ in the Napoleon topic).

Throughout the Napoleonic Wars troops had been stationed on the island to repel any invasion attempt by the French and the rugged coastline was heavily defended with batteries placed on every potential beach landing site. At the time of Napoleon’s exile in 1815, these troops were the equivalent of one battalion of infantry and a regiment of artillery. The majority of the soldiers were drawn from volunteers and veterans from Britain many of whom were recruited off troop transports on their way back from service in India.

The British Government had sub-contracted the management of St Helena to the East India Company in whose interest it was to maintain good order so that its ships could take on fresh supplies of food and water. The East India Company paid all the costs of the island’s administration so that the British Exchequer was relieved of the burden.

Although there was no harbour, the Roads at Jamestown, the island’s capital, could hold up to thirty ships at anchor at any one time and passing Naval vessels could also find shelter in the Roads alongside the East India Company’s East India-men.

The Civil administration included departments responsible for public services, for example, the upkeep of roads; the provision of water; the work of a magistrate and a town gaol. A governor was appointed and paid for by the Court of Directors of the East India Company in London to manage the island.

After the Governor, the most powerful civilian on the island was the EIC’s commercial representative, or principal agent, who, at the time of Napoleon’s exile, was William Balcombe.

Balcombe occupied a complicated and potentially conflicted position that was to lead to significant problems for himself, his family and Sir Hudson Lowe, the military governor appointed by the British Government to guard Napoleon.

First, Balcombe was in partnership with two others, a William Fowler and Joseph Cole in a private trading company that they co-owned and managed which had a monopoly to supply ships chandler and victualling services to all shipping visiting the island, both civil and military.

Second, Balcombe was appointed sole agent by the British Government in London for the provision of supplies to Napoleon’s household at Longwood which numbered forty mouths. This caused continual conflict with Governor Sir Hudson Lowe who was responsible for the prisoner’s annual expenditure budget.

Third, Balcombe had served in the British Navy; was well connected with the Royal Court and the Admiralty in London and may well have reported events on the island to his ex-colleagues that by-passed the Governor. The British Navy enjoyed better relations with Napoleon and his suite than either the Governor or the Army. In addition, Balcombe was of the Liberal persuasion and sympathetic towards the prisoner. Governor Sir Hudson Lowe accused him of facilitating secret communications between Napoleon and his supporters in Europe and of undermining his orders.

Fourth, Balcombe had got to know Napoleon on his arrival on the island in October 1815. The emperor had spent the first few months on St Helena staying with the Balcombe family at their home, The Briars, before moving to his permanent lodging at Longwood. At The Briars Balcombe and his family had been welcome guests at Napoleon’s table on many occasions. 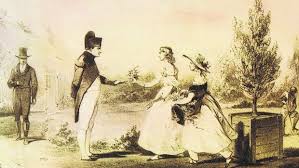 Finally, and in consequence of his time at The Briars, Napoleon took a fancy to Balcombe’s fourteen-year old daughter, Betsy.

Betsy wrote in her diary, and later in a book published when she was in her forties, that she and Napoleon had flirted together in the garden at Longwood and that she had got to know him at close quarters. Betsy and other members of the Balcombe family were to become principal sources for the story of Napoleon’s time on the island.

Sir Hudson Lowe finally lost patience with Balcombe and his goings-on and insisted that he should be removed from the island. Balcombe and his family returned to England where he spent some time clearing his name before being appointed to a senior government  post in New South Wales.

Although the Governor, Sir Hudson Lowe, was responsible to Lord Melville, the Secretary of State for the Colonies in London, his prime duty was the safety of the prisoner on St Helena and this was mainly a military matter. Sir Hudson Lowe employed a staff of which the two key posts were his ADC and Military Secretary, Major Gideon Gorrequer and his Deputy Sir William Reade. Although Gorrequer affected loyalty to Lowe he kept a coded diary that was highly critical of him and mocked the social pretensions of Lady Lowe, daughter of a colonial official and widow of an army officer.

Reade was a hard-liner regarding Napoleon’s imprisonment and often felt that Lowe was too soft in his dealings with Longwood. He had been a spy, or exploring officer in the Mediterranean theatre during the war and was head of the police on St Helena. Reade was a snooper and kept a record of all civilian and military personnel on the island who he regarded as potentially traitorous. He may well have reported his suspicions via secret communications to the Foreign Office in London by-passing and undermining Sir Hudson Lowe.