How London’s merchants were powered by chocolate and gambling and frequented establishments like the Cocoa Tree club.

Origins of the fever for drinking chocolate go back thousands of years.

The Mayans in South America developed a taste for it making chocolate a significant part of their economy and culture. The Aztecs used chocolate beans as a currency to buy food, clothes and slaves.

Chocolate was also used as a drug and an aphrodisiac. Cortez and the early explorers from Portugal, Spain and later the Dutch, soon realised its potential for export to Europe.

By the late 17th century chocolate had become the beverage of choice for the aristocracy, wealthy individuals and the clergy. Choco-mania swept the country and the drink was well established in the City of London.

London’s merchants were experiencing a rapid expansion of their overseas trade as Britain fought off its rivals to become the greatest of the age (See The Empire of the Oceans in the Vive L’Empereur topic).

The first ‘clubs’ were crude affairs, consisting of a stall set up on a street corner where city commuters could buy a cup of chocolate on their way to work and drink it on their feet. They were not unlike the ‘street food’ shacks of today. 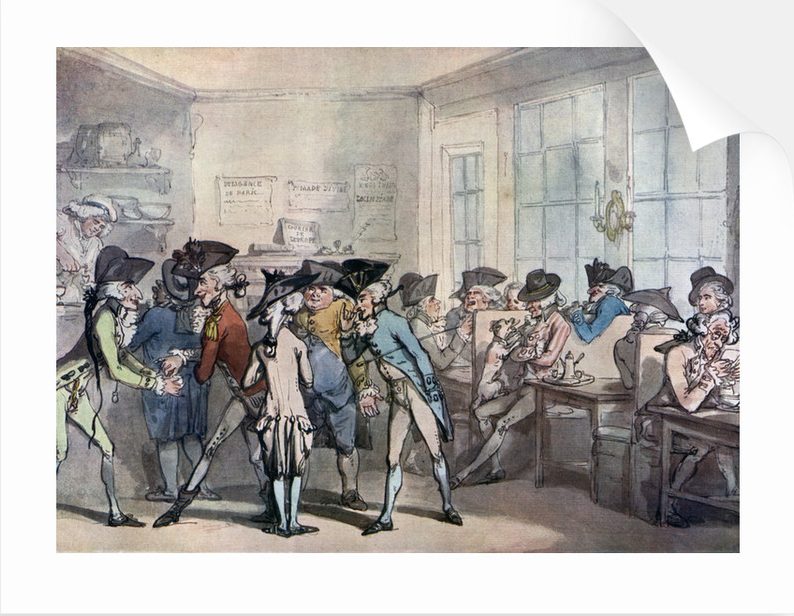 Soon, however, the stalls became more sophisticated with tables and chairs laid out on the pavement where individuals could sit with their friends and colleagues in a sociable way. They quickly became places where, first, gossip and then information could be exchanged. The next step was to move the stalls and their beverages inside and the first chocolate shops were started. It was inevitable that in a city dedicated to money-making, individuals sharing the same interests would be drawn together and the chocolate shops soon began to attract traders from the same markets.

The first recorded club was Jonathan’s where stocks and shares were bought and sold each morning. Shipping insurers met and exchanged news about arrivals and departures into the out of the Port of London on their doorstep and one of their members, Edward Lloyd, thought of producing a daily paper-based version of these movements and Lloyds List appeared. Soon other shops were started visited by merchants specialising in Virginia, Baltic and Russian trades each having their favourite chocolate shop.

It was not long before the merchants understood that, first, attendance and, then, membership gave them a significant commercial advantage in the market and the first membership rules were introduced.

By the mid eighteenth century, the idea of ‘clubs’ spread into wider society. Clubs were usually named after their proprietor: Anderson’s for Freemasons, Child’s for bookworms, Batson’s for physician and the Grecian for learned men.

It was inevitable that these ‘clubs’ would enter the domain of politics and government and they soon became places where like-minded gentlemen could meet and discuss the affairs of the day in congenial surroundings. Clubs moved West and occupied premises in St James’s and Pall Mall, close to the Royal Palaces and to Parliament. 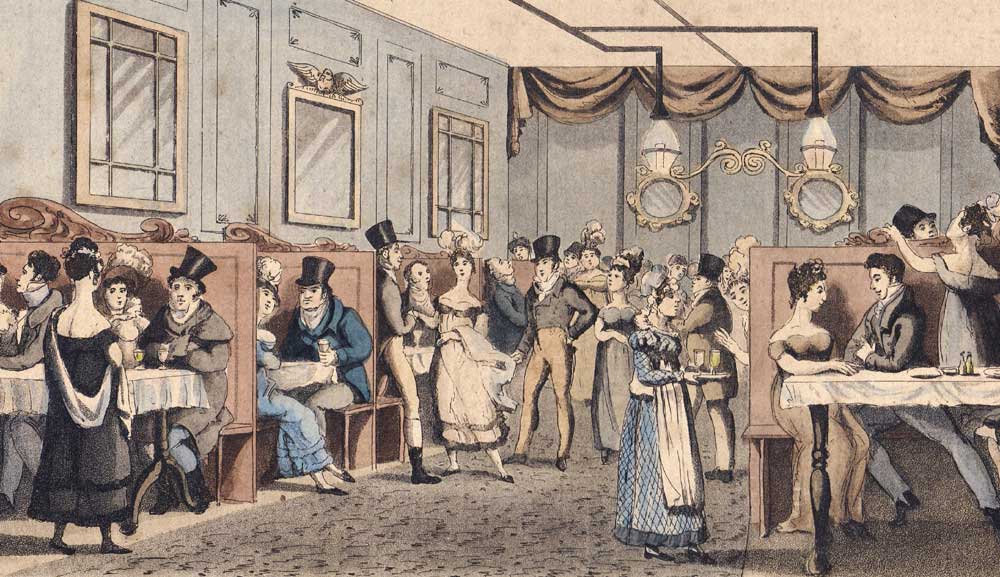 Tory Party supporters joined the KitKat club, Ozinda’s, White’s and Boodles. Whigs joined Almack’s and Brookes. Some, like William Pitt the Younger, were of sufficient political stature and popularity that they were members of clubs of both colours.

The Cocoa Tree Cub was started in the reign of Queen Anne in c. 1746 and became the headquarters of the Jacobite party who sat in the Tory interest in Parliament. It was originally situated in Mayfair before moving to Pall Mall (now the RAC club) for a time and ending up at 64/65 St James’s where it remained until 1932.

Members dined in the club each night at a common table the bill being shared amongst them. Edward Gibbon, invited to dine there with a friend in 1762 reported ‘twenty or thirty of the first men of the kingdom in point of fashion and fortune supping at little tables covered with a napkin in the middle of the room upon a bit of cold meat or a sandwich and drinking a glass of punch.

The Cocoa Tree was notorious for heavy drinking and gaming and fortunes were won and lost in an evening’s play. On one occasion a game of hazard led to the loss £180,000 by a young man who had newly inherited his estate. His opponent, a notorious Irish gambler, allowed him one more turn of the dice to win it back.

Next door to the Cocoa Tree Club, the home of Tory die-hards, was Almack’s, later to become Brooks which was the headquarters of the Whig interest in St James’s. When it opened in 1765, Almack’s was situated in Pall Mall but later moved to its permanent site.

Almack’s quickly became the most sought after club in London for those of similar persuasion. The club had three elegant rooms and provided supper and dancing on a weekly basis. Many of its members were addicted to the latest fashions and it became known for the macaronis, young men of high fashion who affected the latest styles from Italy including a quiff.

Most remarkable of all about Almack’s was the presence of a club within a club, the so-called Female Coterie or Ladies Club. The Coterie’s members were high born women with impeccable connections. The club was founded in 1769 and quickly attracted much attention. Its most distinguishing feature was that membership was by ballot of both female and male members and one black ball was enough to exclude an individual. Exclusion meant social disaster and the rules were most strictly applied with a few notable exceptions.

One of these was Lady Holland, wife of the third Lord Holland, who was effectively leader of the Whig Opposition to Lord Liverpool’s Tory Government of the early years of the nineteenth century.

Elizabeth Holland, the only daughter of a millionaire plantation owner in the West Indies, had been married off at 15 to a husband of 49, Sir Godfrey Webster. Holland and Elizabeth met whilst on the Grand Tour in Italy and fell madly in love. On their return to England they set up house together and had two children. The affair caused a scandal and Henry and Elizabeth were banned from Court but this did not prevent them playing leading roles at both Almack’s and the Coterie.

At its peak, Almack’s and the Coteries attracted the highest in the land and a number of notable and powerful women including Amelia Stewart, Lady Castlereagh, wife of the Foreign Secretary; Sarah Villiers, Countess of Jersey, owner of Osterley Park and one of the richest women in England; Emily, Countess Cowper, sister to Lord Melbourne and later married to Lord Palmerston, another Prime Minister.

Each of these women exercised their own social and political influence by using their connections, patronage, wealth and positions at the highest levels in Society.

The women also used their ballots to promote favourites and ban those they disliked and Lady Caroline Lamb was one who incurred their extreme displeasure. She was married to Lord Melbourne but started an affair with Lord Byron that was greatly disapproved of by the Coterie. The couple had met at Holland House, home of the Hollands, and the membership of both Almack’s and the Coterie took sides along family lines that split St James’s into two irreconcilable camps.

London’s clubs flourished throughout the nineteenth century and still do good business today. The Carlton Club is the club of choice for Tory members of Parliament; the Fly fishers for lovers of the Test and Itchen; soldiers join the Army and Navy and Orientals the Travellers Club.