Michael Fass has been honoured by The Royal Historical Society (RHistS) with the award of a Fellowship in recognition of his research work related to the final years of Napoleon’s life on St Helena.

Michael has commented: “I am more than delighted with this appointment that recognises the work that I have done on this topic.” 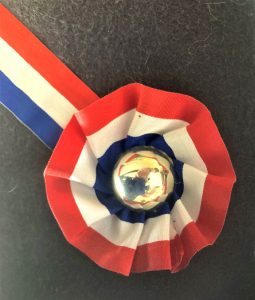 In an extraordinary set of circumstances a Tricorn hat that once was worn by Napoleon in battle has been found in a family’s attic in Germany.
It is impossible to know how this became their property and whether they were friend or foe.
The hat was for the dustbin but an observant dealer saw some marks that alerted his attention together a stray hair.
The hair was sent for analysis and was found to be an exact DNA match with Napoleon’s.
Now, all that is missing is the head inside the hat which lies in the Pantheon in Paris!

A French general of the Napoleonic wars is being denied re-burial on French soil because of a contemporary war in France. General Cesar de la Sablonniere was killed outside Smolensk in 1812 during Napoleon’s disastrous advance into Russia. He was buried where he fell but his remains have now been found in a municipal park in the Russian city.

President Macron has declared that his body will not be welcome back in France as those who wish to honour him are associated with the Right. In the town where the general was born, the mayor has declared “We haven’t got the money!” When his body arrives, it will be greeted by re-enactment enthusiasts in full Napoleonic uniform.

Killed with a splash of cologne!

A researcher in Great Britain has come up with a new theory about what killed Napoleon:

It was his excessive use of cologne!Apparently, Napoleon used up to 40 bottles of the stuff each month and would almost drown himself in it at morning ablutions.

Whilst not known as a poison, cologne contains dangerous ethanols in its essential oils that could have entered his body and disrupted his natural protection from cancers.

The more usual theory for the cause of Napoleon’s death was a genetic disposition towards the stomach cancer that had also killed his father at a young age.

As the 200th anniversary of Napoleon’s death approaches, the campaign for his reputation is being fought on paper and in the media once again.
From the very day of his death, historians have argued over his legacy. Was he hero or tyrant?
Those who support Napoleon have always had the better of it; starting with Barry O’Meara’s hagiographic account written in London as soon as he had returned from St Helena.
Read all about it on this website at ‘Napoleon’s Final Years’.