The account of Napoleon Bonaparte’s journey into exile and his arrival on St Helena must inevitably be partial. There were many twists and turns in his fortunes between the years 1813. These included his retreat from Moscow; his banishment on the island of Elba in 1814 and his final defeat by the Allies at Waterloo in 1815. Before these seismic events Napoleon Bonaparte had never lost a battle. After Moscow, although he won one last battle (the so-called Battle of the Nations), his glory days were over. He had exhausted both the quantity, quality and loyalty of his armies. Moscow was the first sign of the end of his invincibility. It came after fifteen years of war in Europe.

The invasion of Russia

The disastrous campaign in Russia cost Napoleon Bonaparte his empire. His political position was compromised following the annihilation of the Grande Armee on its retreat from Moscow. After taking Smolensk, Napoleon’s army was the greatest ever assembled in Europe. It  consisted of troops from over fourteen nations. The army crossed the river Niemen into Russia in August 1812.

Russia’s First Army under Kutozov retreated along the Borowski road in complete disorder towards Moscow. It stood to fight at Borodino. Smolensk should have been a warning of what the Russians would do next. As they retreated they burned the city to the ground. They left behind them on the road east a ruined and smoking land. They burned all of their crops, windmills, bridges, fodder and grain stores. They killed all their livestock as they went.

Napoleon’s army had sufficient rations for twenty-four days when it crossed the Nieman into Russia. The plan was that his troops would be able to live off the land. Napoleon aimed to take Moscow within weeks. Instead his men suffered from typhus fever and began to die in the heat and dust. They had to drink their own urine. Thousands  of horses died each day. Napoleon could not believe that the Russians would deliberately set out to destroy their own land and its people. The burning of Smolensk should have been a warning to him.

Neither could he imagine they would do the same in their precious capital, Moscow.

The battle of Borodino 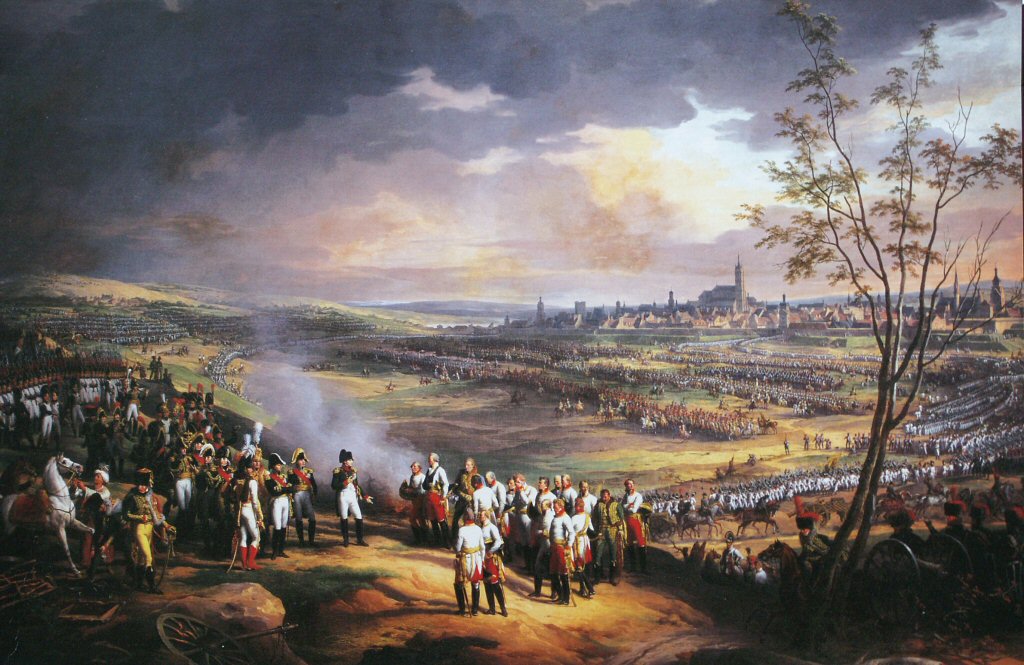 Then came the Battle of Borodino. The bloodiest and most costly of all the battles that Napoleon fought throughout his career. Kutosov commanding the Russian forces had built three stone redoubts. He placed them strategically in the centre of the battlefield. They cost over 28,000 French casualties as they assaulted uphill. 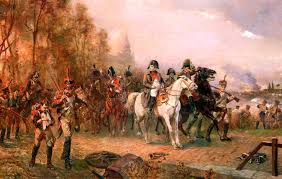 After the battle Napoleon excused himself that he had been ill. He had been struck down by an attack of dysentery on the morning of Borodino. He had spent most of the day sitting on a stool in his tent shitting into a bucket. He had given his marshals too much discretion.

Two days later, the advancing French army first saw on the horizon the glow of the fires that the Russian Emperor Alexander had started in Moscow.

The Czar had set his capital on fire. As the Grande Armee approached Moscow conditions deteriorated further. The weather remained unseasonable. Baking sun was followed by heavy rain. Men and horses continued to die in their hundreds. The French needed to reach Moscow quickly before the Russians destroyed the whole city and all of its supplies, upon which the French were relying.

The Sack of the City

It was inevitable that when the troops arrived in the city they would go wild and take their revenge for the troubles they had experienced. For a week, the army behaved like a pack of wild animals as they raced around looting the city. Officers’ chargers became pack horses and their carriages became vehicles for transporting plunder. The men raided the wardrobes of every fine house in Moscow. They roamed the streets dressed in a motley assortment of civilian clothing. They abandoned their arms and ammunition. They filled their knapsacks with valuables instead. Discipline completely broke down.

The memory of the few survivors was of the appalling stench in the air from a combination of burning timbers and cooked horsemeat. The army had to eat its only way home.

The retreat from Moscow

In October the weather changed dramatically for the worse with day after day of freezing rain. There would be no hope of defeating the Russians or of surviving a winter in Moscow. Napoleon gave the order to retreat.

His troops would cross back over the Niemen and spend the winter in Dresden before attacking again in the spring. By this time the road to the west out of Russia and to safety was blocked by the dead and dying of Borodino. The French wagon train was still trying to reach Moscow expecting its share of plunder. As the Grand Armee began its retreat all about it was the detritus of retreat. The landscape filled with broken tree stumps, dead bodies, discarded weapons, swords, saddles and chests. Plunder spilt from empty suitcases. 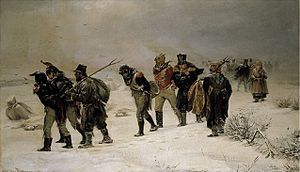 The men were soon starving and left the line of march to hack pieces of meat from the dead. When horseflesh was no longer available, they took to cannibalism. They used anything they could find for firewood. They tore down the beams of the few remaining barns left standing to build their cooking fires. This meant there was soon no shelter to be found anywhere along the line of march. Men died each night under open skies at temperatures of -30c. In the morning those left alive dragged themselves awake stepping over the faces, arms and legs of both the living and the dead. Many bore the signs of torture and mutilation. The weather was atrocious with bitter, violent storms,  winds and icy rain. The snow was so thick they could not see in front of their eyes.