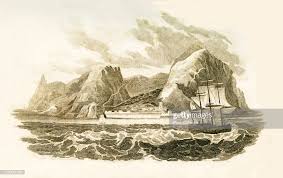 The island of St Helena was discovered by Portuguese explorers on or around 1502AD. It is considered to be one of the most remote islands in the world and is one of a number of islands in the South Atlantic that include Ascension Island and Tristan da Cunha. The island lies 1500 miles east of Rio de Janeiro in South America and 750 miles west of Namibia in Southwest Africa. It is 4671 miles from London and 1956 miles from Cape Town. The Normal sailing time to and from London was five weeks and from Cape Town three weeks. The fastest times between London and St Helena were recorded by the East India Company’s fast packets when journeys could take a little over three weeks.

The Portuguese were seeking a route to the East and Vasco da Gama had discovered the passage via the Cape. A later captain, John da Nova Castella, having fought a successful engagement against Moorish pirates, came across the island on his way home to Lisbon and named it St Helena in honour of the wife of the Emperor Constantine whose name day it was.

Da Nova had anchored opposite a deep valley which later became the main settlement of Jamestown. There were no humans on the island and the interior was completely forested. However, its location on what was to become the main trade route between Europe and Asia made it a very suitable re-victualling place for ships travelling in either direction. 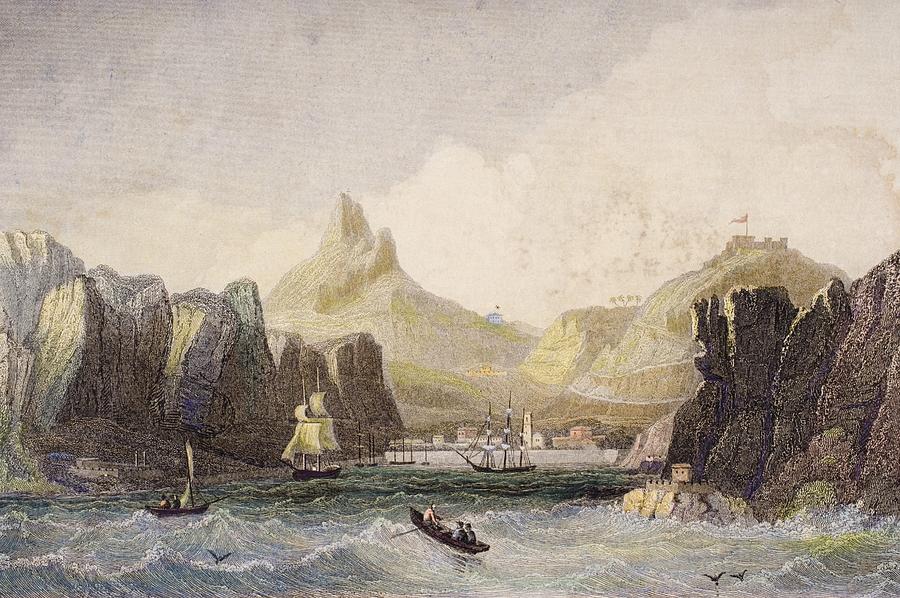 The first recorded occupation by the English was by Captain Cavendish in 1588, the year of the Spanish Armada. A subsequent visiting captain, Captain Lancaster in 1593, found the island in poor condition and with a marooned crew member of an earlier landing who may have the model for Defoe’s novel Robinson Crusoe he was in such poor condition and driven mad with loneliness.

In those days it was a very far distant spot.

By the time that Napoleon arrived in late 1815, the area around Government House, where Sir Hudson Lowe, his family and staff would settle, was an attractive sight. 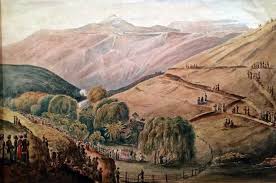 Its lanes were shady and bordered by bright yellow gorse and an abundance of buddlea running in and out of numerous valleys and ravines. However, this was deceptive. Beyond these gentle slopes outside of Jamestown, the island was harsh.

It was made up of a series of volcanic ridges. Some large and deep, others small and shallow but all without exception hostile to humankind and any sort of cultivation. Only the large population of goats could find any purchase.

St Helena measures 45 square miles or 28,000 acres, and of this, 2,000 acres is completely barren wasteland. In a survey of 1875 (and not much had changed since Napoleon’s day) 9,000 acres was scrubland and only good for rough grazing and the remainder was either leased to private property owners or kept by the Company for its own purposes.

Only a small proportion of the land was suitable for cultivation and sheep. Instead of using the manure from the horses and stockyards in Jamestown, this valuable by-product was always thrown into the sea.  This diminished the condition of the land until it was almost exhausted and the guano that was collected from the cliff tops around the coast was exported to Europe and not used in the fields.

There were c.200 properties on the island of which 100 had land around them. Some were quitter large and Plantation House, Sir Hudson Lowe’s residence, had 40 rooms.

The appearance of the island was similar to that of Gran Canarias in the Canary Islands which was also volcanic. The area around Jamestown, Plantation House and The Briars formed a fertile bowl but the remainder of the island was harsh and exposed to south westerly winds. Diana’s and High peaks were at more than 2,500 feet with thick layers of lava falling down their sides and this was particularly noticeable at Sandy Bay where lava bubble up from the shore. Where Longwood House was situated the land was boulder-strewn, hostile and scrubby.

St Helena passed through several hands before the British took it on. Portuguese, Spanish and Dutch traders and military occupiers all had their time but in 1661, King Charles II granted a licence to his East India Company to fortify and settle the island. The EIC’s interest was to secure a staging post for their vessels in transit to and from India. As the Company’s trade increased so too did the importance of the St Helena to their operations. The island had long been a source of sea salt with which to preserve and cure meat but now it became an important source of fresh water, meat, fruit and vegetables, the latter of which would be used against the danger of scurvy. 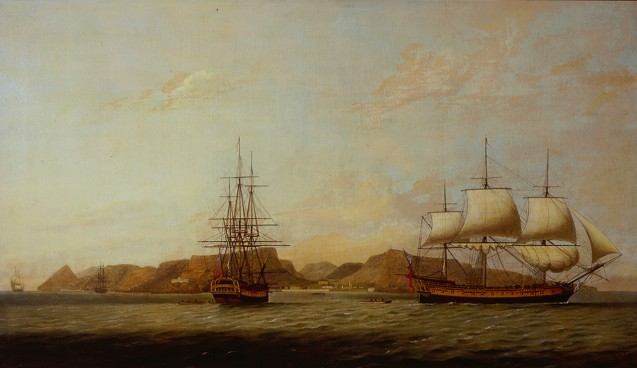 The Dutch made a final attack on the island in 1673 but were fought off and St Helena was now confirmed as a vital fortress and possession of the Crown. The climate was favourable and the soil was fertile. It was an ideal spot for British occupation.

Britain’s wealth was dependent on overseas trade with the East and St Helena represented the vital watering and refreshing point for the increasing number of the ships that made up the East India Company’s fleet. 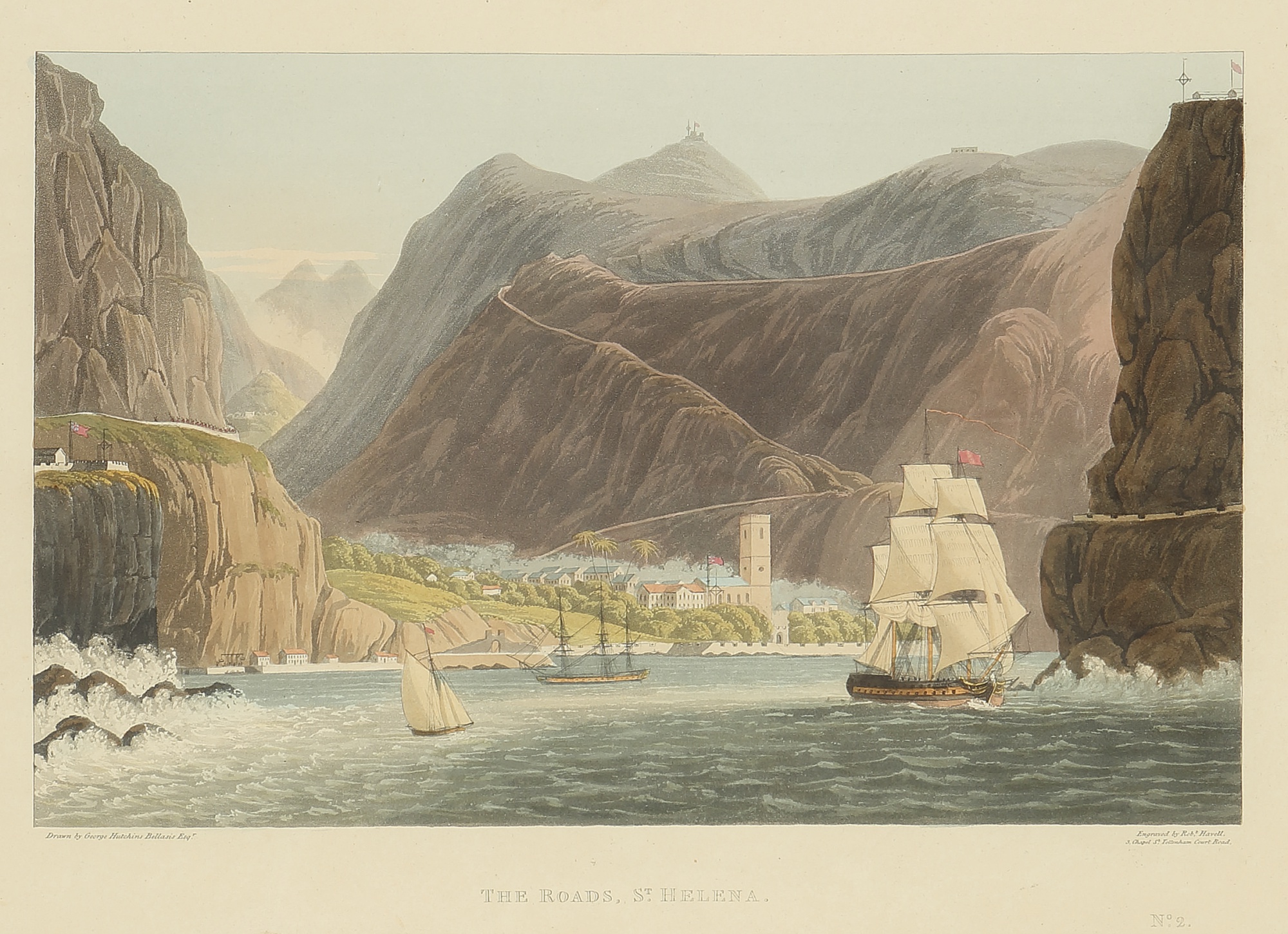 By 1806, over 165 EIC vessels put in at St Helena each year in addition to British Naval vessels and commercial shipping from other European trading nations, for example, the United States, who were known as interlopers.

These temporary residents who stayed for no more than three of four days, required a very large victualling operation across the island that was organised on behalf of the EIC. The Company owned a significant acreage of its own as well as relying on independent owners and producers. Slaves were brought to the island from Martinique to work the land and productivity was high.

Employment and trade on St Helena

In addition to mutton and pork, turkeys, geese and ducks were traded along with a wide variety of fish including mackerel, tuna, dolphins and congers. In 1805 the population was 2064 of which 504 were white and 1560 were black of whom 329 were free. This excluded the garrison and EIC establishment.

The civil establishment of the EIC consisted of a Governor and Council in addition to accountants, paymasters store keepers and their assistants. The military force consisted of a Corps of artillery, a regiment of infantry and five companies of volunteer militia. The main source of full time recruits were soldiers returning on expiry of their service from India who decided that employment on St Helena was preferable to continuing on home.

The EIC employed an agent on the island who at the time of Napoleon’s imprisonment was William Balcombe who lived at The Briars, the most comfortable house on the island (See William Balcombe & Betsy in the St Helena theme). However, Balcombe also owned the principal private victualing agency on the island and this made for a complicated set of relationships involving the EIC, Governor Lowe, the British Cabinet and Napoleon himself. This was to lead to Balcombe’s eventual dismissal. It was often difficult to understand just who Balcombe was representing.

After security, the main purpose of activities on St Helena were the EIC’s gardens that is their acreage of fertile and tilled land. This consisted of orchards for trees, pannage for goats, pigs and cattle and fruit and vegetable gardens.

Originally the ground had been given over to New Zealand flax but this crop had become less profitable and fruit took its place on the lower ground and included vines, figs, oranges and lemons. Cabbages, peas, beans and other root vegetables were grown in abundance in addition to potatoes, yams and bananas. In the livestock department stock included beef, hogs, cockerels and hens, ducks, geese and turkeys. Sugar cane, cotton, indigo and tobacco was also harvested. Fruit orchards included pears, plums, apples, cherries, peaches, apricots, cherries and gooseberries. Of these only the apples and peaches could be grown in industrial quantities, many other varieties quickly reverting back to nature. A total of 5108 acres was under cultivation and all ownership was the property of the EIC under the Crown.

There had always been a fishery on the island and fresh and salted fish had been plentiful but during the time of Napoleon’s imprisonment the supply of fish was severely restricted. Governor Lowe (See Sir Hudson Lowe in the St Helena theme) was anxious about a rescue attempt by sea. The Navy’s island squadron were kept on continual alert and fishing licences were almost impossible to obtain.

Managing the island of St Helena

Over the period of the British occupation and the EIC’s governorship, the island had experienced good governance and bad. This had included a number of munities by locally raised Militia that had led to Courts martial and executions. Property had been disposed of illegally and below its value, frauds perpetuated by dishonest clerks and the island’s treasury robbed of thousands of pounds. 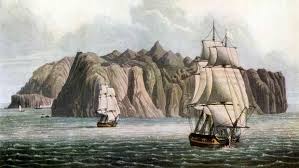 As the EIC’s trade with the East grew, the importance of the island greatly increased. The resident governor appointed from London, now needed a deputy and the paraphernalia of colonial government that included: a court of justice, a prison and the stationing of regular troops and warships out of South Africa and the South Atlantic Squadron respectively.

Regular troops included a battalion of infantry and a corps of artillery in addition to a locally raised regiment, the St Helena Regiment, which shared guard duties throughout the island whilst Napoleon was imprisoned there. A number of St Helena men had joined the expedition to invade La Plata in 1806 organised by Home Popham who subsequently found themselves prisoners in the Argentine (See the British Invasions of South America 1806 &1807 in the Vive L’Emperor theme).

Following Napoleon’s death in 1821, and the withdrawal of the troops who had been guarding him, the importance of the island diminished and in time its role was taken over by South Africa, the Cape Province and Simons Town as more suitable places for settlement, re-victualling and ship fleet maintenance.