Two failed invasions of South America in which the British were utterly humiliated.

The Dutch empire in the East had been weakened following its recent defeats by the British both in the English Channel and in the Indies. Britain now aimed to occupy the well-placed harbour and its hinterland at the Cape in South Africa that was situated mid-way between Britain and India and whose facilities could be developed as a major transit point for the East India Company (see the Charter companies in the Empire of the Oceans) and the British Navy.

The Company’s vessels needed to replenish their water and food supplies on their way to and from India and the Navy needed a base from which to patrol the Indian Ocean and protect the Company’s Far Eastern convoys to and from England’s ports. Before the capture of the Cape only the island of St Helena, which was managed by the East India Company, had performed this function.

The naval commander of the expedition appointed to invade South Africa was Commodore Sir Home Popham who enjoyed a mixed reputation. 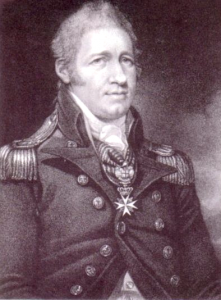 He had joined the Royal Navy as a boy aged 12 but had resigned his commission as a young man and had entered the carrying trades, shipping goods from one Mediterranean port to another and selling goods on spec. He had made a lot of money for his investors and was known for sharp practice that included engaging in piracy along the North African shore. When the Napoleonic wars broke out, he used his connections to re-join the Royal Navy and was appointed its in-shore and beach landings chief at which he had excelled. His record in the dismal Walcheren campaign had led to his appointment to lead this expedition. He was believed to be as much interested in plunder as in the usual work of the Service and had narrowly avoided Naval Courts Martial on a number of occasions.

Popham’s British Army counterpart at the Cape, the military commander, was Major General Sir David Baird a Scotsman with a heroic record. 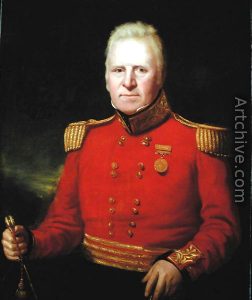 Baird had been taken prisoner in India during the Maratha wars and, following his capture by Tippoo Sultan and his cruel son Ali, had been kept in unspeakable conditions in prison for three years before escaping. Sir David Baird was tough, resourceful and with long experience of campaigning in India and Egypt.

The British invasion of the Cape 1806

In September 1805 over 6,000 men had left from Cork in Ireland travelling in sixty-one transports with a naval escort of twelve warships. The invasion fleet took its time sailing down the coast of West Africa before crossing the Atlantic to Bahia in Brazil. It then crossed back again via Ascension Island and arrived off the Cape in South Africa in January 1806. The British plan was to land an invasion force across the open beaches of Table Bay before taking on the Dutch forces inland. By the 18th January after a brief encounter at Blaauwberg, the Dutch commander, Janssens, aware that he could expect no re-enforcements from Europe, surrendered to the British.

The majority of the troops that had sailed to the Cape had already been ear-marked to continue their voyage to India as re-enforcements where the British were fighting in a number of vicious campaigns. Only a token force would remain in South Africa as occupation troops.

However, before Popham had left for the South Atlantic he had entered into discussions with his City friends who had agreed that South America – and specifically La Plata and the Spanish province of Argentina – could provide rich pickings for the expansion of British trade.

Without waiting for fresh orders from the Government in London – and knowing too well the time it would take for permission to be considered and granted – Popham persuaded Sir David Baird, who had now been appointed governor and commander in chief of the newly acquired Cape Colony in South Africa, to delay the forwarding of the troops to India, as previously ordered, and instead lend them for an amphibious expedition across the South Atlantic.

How Baird was persuaded of this course of action can only be speculated upon but it could have included Popham’s reputation as a buccaneer and the opportunity for booty.

Popham’s case was strengthened by the arrival in his headquarters at Simonstown in the Cape of a Scotsman named Russell who had come from Buenos Aires via the island of St Helena. Russell advised that the Spanish Government’s annual consignment of gold bound for Spain had arrived in the city from the mines in Potosi that were further inland. There it was assembled before being shipped to the Treasury in Madrid. The Spanish transport fleet would not arrive until the Spring and meanwhile the gold was lodged in the city’s treasury. The city was defended by a single Spanish regiment and its local militia was a rabble.