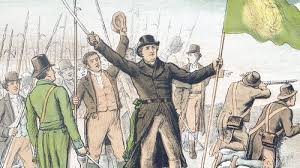 By 1794 mainland Europe was dominated by France and its Emperor, Napoleon Bonaparte in alliance with the King of Spain. Revolutionary ideas swept across the four continents of the Atlantic World. One of the first countries to be effected was the island of Ireland where opposition to British rule led  to a bloody rebellion followed by brutal repression.

Many towns declared themselves self-governing republics after the French fashion. In 1798 France invaded Ireland twice as the rebellion spread and British troops took revenge with both sides committing dreadful atrocities. An uneasy peace was only restored after an estimated 31,000 rebels had died.

Cause and effect – how the British repression the rebellion in Ireland.

Ireland had never been a settled place since the English had first arrived on the island in the time of William of Normandy. The English had either defeated the old Irish kings in battle or absorbed them into their society. Successive English rulers, notably Queen Elizabeth I and Protector Oliver Cromwell, had extended English rule to subjugate Ireland’s principally Roman Catholic population. This had included the ascendency of a Protestant oligarchy in both North and South.

As the ideas of the French Revolution spread across the whole of Europe, intelligent and well educated individuals in both England and Ireland looked for redress, change and the sharing of political power. This was ruthlessly denied in Ireland by successive English governments who ruled through a small landed elite. 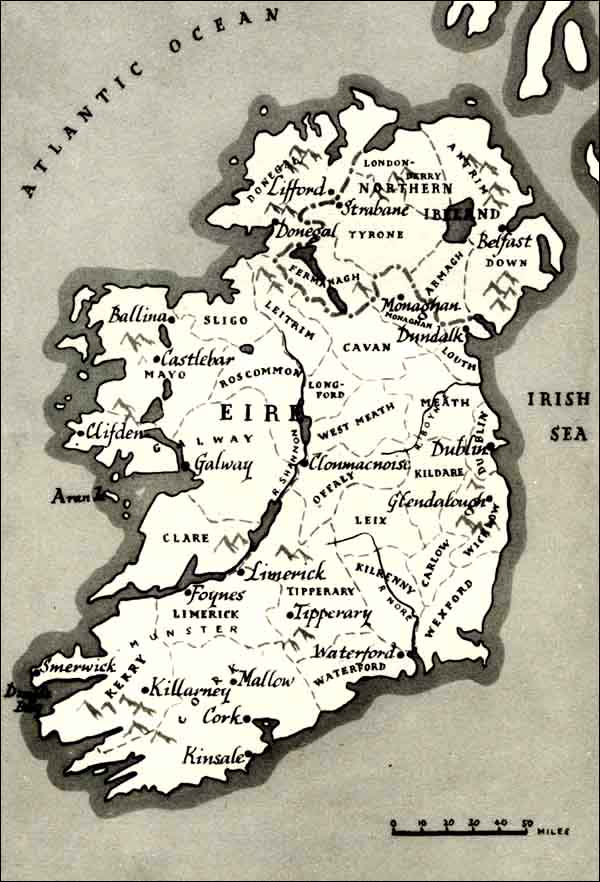 The ownership of land was the principal cause of civil unrest with the majority of the population living as tenants on land owned by absentee English landlords, many of whom had never visited their inherited estates. Only property owners had any kind of voting rights whilst their agents applied ruthlessly for rents even at times of poor harvests and its subsequent hardship. This caused widespread resentment, eviction, homelessness and distress throughout the rural community that represented 90% of Ireland’s population.

The largely Roman Catholic rural population was denied its liberties which were confined to the propertied and overwhelmingly Protestant minority. This minority, that had acquired its land and power through conquest and confiscation, continued to exploit its advantages. It achieved this in political life and the established Anglican church, through its political patronage, appointments in government, in the Army and Militia and through the Magistracy in every County.

Now, hard questions were beginning to be asked about the legitimacy of the English regime centred in the capital, Dublin, and the implications of the demands for equality and common justice that had spread throughout Europe and from North America, triggered by the successful American Revolution.

In response to the continuing repression, a number of secret societies were formed in the rural areas of Ireland, the most effective of which was ‘the White Boys’ movement. Presbyterian Scots in Ulster (also discriminated against) joined the ‘Hearts of Steel’. Both combined to form a pan-Ireland resistance movement known as the ‘United Irishmen’ whose armed wing was the ‘Irish Defenders’.

Anticipating trouble, the viceroy’s response was to station two regiments in each Irish County; form local Yeomanry squadrons made up of minor Protestant landowners and raise a much enlarged volunteer militia. 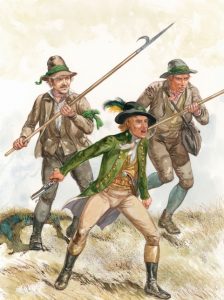 Trouble was not long in coming. A number of key Irish revolutionary leaders, including Wolf Tone, who had fled initially to The United States, returned to Paris and in December 1796 persuaded Napoleon to launch an invasion of Ireland. 15,000 Frenchmen sailed towards Bantry Bay and a general uprising and rebellion was declared. A violent storm destroyed the main French fleet that failed to land and sailed home but the authorities now knew the kind of trouble that lay ahead.

Martial law was declared and an uneasy peace descended except in Ulster where the Army carried out the first of many atrocities over a wide area that shook the will of its inhabitants to resist as the rebellion was brutally repressed. However, as the United Irishmen’s propaganda spread in the form of pamphlets, ballads and the distribution of Thomas Paine’s book The Rights of Man, its membership expanded. At the close of 1797, the magistrates of Wexford, which was to form the central drama of the Irish Rebellion of 1798, declared that the County was in a state of insurrection and England found itself facing not only the combined forces of France and Spain on the Continent but also the imminent threat of a second French invasion by Napoleon’s troops.