The conditions of Napoleon’s exile and imprisonment on St Helena were harsh and Napoleon made life as difficult as possible for Sir Hudson Lowe whose job it was to keep the ex-emperor secure. 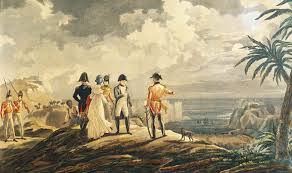 Although Lowe had over 3,000 British troops, of which the principal force was the 66th (Berkshire) Regiment of Foot and a Naval Squadron to assist him, he found that many of the most influential individuals on the island, both civil and military, were sympathetic to the prisoner. These included William Balcombe, the East India Company’s agent on the island and his daughter Betsy, and the author Frederick Marryat, commanding HMS Beaver. This led to accusations of treachery; courts-martial and banishment.