The heroes of Albuera who guarded Napoleon on St Helena.

Royal assent to the new regiment was granted on the 19th December 1758 which would be known as HM 66th Regiment of Foot. The Regiments of the Line guarded their seniority jealously. There were the ‘first fifteen’ for example, the old Twelfth of Foot (Suffolk); the ‘first twenty-five and now an increase to a total of seventy five infantry regiments. The newly appointed colonel was:

‘By beat of drum or otherwise to raise so many men in any county or part of our Kingdom of Great Britain as are or shall be wanting to recruit in our 66th Regiment of Foot under your command to the numbers allowed upon the establishment.’ 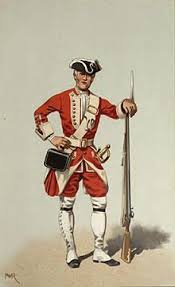 In 1775, the 66th moved to Ireland where it remained for ten years in various locations.

Soldiers were often scattered in small detachments that would have included Dublin, Wicklow, Carrick Fergus and Fermoy and troops were used in a variety of non-military roles including collecting customs duties.

The political situation in Ireland was never comfortable for the troops stationed on the island. Over eighty years earlier, open warfare between the English, in the minority and mainly Protestant, had supported the action by Dutch King Billy, William of Orange, against the forces of the Catholic King James II. 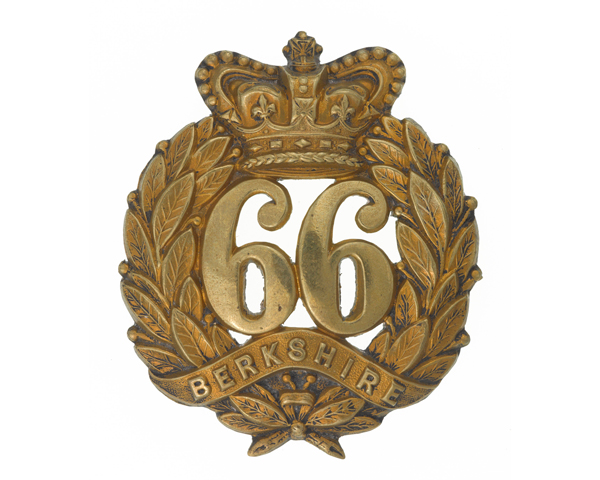 In 1782, a county association was given to each regiment in order to assist its recruiting activities and the 66th created its own regimental district when it became HM 66th (Berkshire) Regiment of Foot on the orders of King George III.

“His Majesty having been pleased to order that the 6th Regiment of Foot, which you command, should take the County name of the 66th or Berkshire Regiment, and be looked upon as attached to that division of the country. I am to acquaint you it is His Majesty’s further pleasure that you should in all things conform to the idea, and endeavour by all means in you power to cultivate and improve the connection, so as to create a mutual attachment between the county and the Regiment which may at all times be useful towards recruiting the Regiment”.

The Regiment was to retain its connection for the remaining 201 years its independent existence.

Between 1785-1814, the Regiment served overseas in a variety of places. The first was on the island of St Vincent in the West Indies where it served for eight years. When the Regiment left the island the old colours were deposited in the court house as “a memento of the services of the corps in the island and a memorial of their good conduct and discipline”.

In 1793, HM 66th sailed for Gibraltar where it served for three years. The Rock was an unpopular station. It had been taken from Spain in the Seven Years War but the Spanish had laid siege to recover the island in 1727 and 1779-83. Food and water were always in short supply and there was little to occupy the troops who lost physical condition.

In 1796, the 66th sailed to Port au Prince on the island of St Domingo. The island had been a Spanish possession known as Hispaniola and was situated near Jamaica, the main British naval base in the West Indies. A violent slave revolt had taken place on St Domingo in the French part of the island (now Haiti). In its first year of operations, the Regiment lost a total of 15 officers and 690 NCOs and men who were either killed in action, or died of wounds or disease.

In 1799, the 66th arrived in Halifax, Nova Scotia, the centre of military operations for both the British Army and the Royal Navy in Canada. It was a prime posting and the Regiment was on continual display. There was time for recreation – canoeing, fishing, snow-shoeing and vegetable growing – between periods of training in musketry and drill.

HM 66th must have had a good reputation as regards its military competence and behaviour in barracks because when the Regiment left for England, the GOC remarked: ‘The striking proof of loyalty, high discipline and obedience call for his most grateful acknowledgement’.