Britons came out of England and Scotland like the Vikings had come out of Scandinavia. The only difference was that whereas the Vikings were driven by land hunger, Britain was driven by the search for trade.  In the mid sixteenth century, the English Reformation had created two significant trends. The first was the loss of markets on the Continent as the countries of Europe closed ranks around their religion and prepared to invade England. The second was the fervour for change caused by enthusiasm for the new Protestant religion. Faith and trade travelled together.

The Portuguese explorers (see the ‘Empire of the Oceans’ in The Atlantic World theme) were the first to venture out onto the oceans beyond the Mediterranean Sea; had already circumvented the world and were using their ships to transport trade goods to home markets. Next, the Spanish had uncovered South America and were busy exploiting its riches, particularly of gold. Then came the French and Dutch who followed the routes made by others and created early colonies in North America and the East Indies. These competitors were going to make no end of trouble for Britain in the eighteenth century (see ‘HM 66th Foot’ in the St Helena theme).

The English, although like any islanders drawn to exploration, were late into the business and trading expeditions were left to a series of adventurers exploiting informal arrangements that were easily deniable by the Crown. Walter Raleigh was an early example of these but even then the journeys that he and his fellow adventurers made were more like Viking raids than an attempt at serious colonisation. The Spanish dispatched an annual gold fleet from Cadiz to La Plata in South America to collect the year’s production from its mines in Potosi (see ‘The British Invasions of South America in the Atlantic World theme). The Spanish fleet was attacked and robbed on its way home.

The Spanish had other interests in the region including the Caribbean islands where sugar and spices were grown.  It was here that English privateers, also known as pirates, had their seasonal depots and terrorised the seas around them.

This was also the time when overseas trade became inextricably bound up with the unspeakable business of slavery and the triangular trade.

The Protestant revolution had also created a new middle class of merchants who were hungry for the expansion of their trade and had the means to do so. 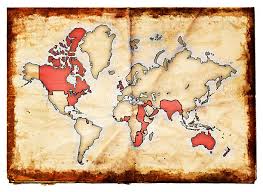 The  creation of  the merchant companies, the first of which was formed by an association of London Merchants in 1601, were designed to share the risks of  trade and to profit from the exploitation of new markets in North and South America and the East and West Indies. The greatest of these would be the East India Company (see ‘Nathaniel Dance and the East India Company’s Marine in the Atlantic World theme). The EIC, or the Honourable Company as it was known, had been set up to trade in spices in the East Indies but had been driven off by the more powerful Dutch. India looked to the British a potentially more profitable alternative, with a population of over 100 million and manufactures of a quarter of the world’s goods. The cultivation of cotton could be used to serve the needs of Britain’s aspirational urban class.

Whilst it was intended that the development of trade should remain a private undertaking, the government was quickly drawn into it as the Exchequer saw the advantages it provided as a way to raise tax. At the same time, investors insisted on protection for their investments and the Royal Navy expanded its Fleet to guard the sea lanes (see Chatham Dockyard and the Infrastructure of Empire in the Atlantic World theme). The East India Company would carry home the goods that would raise revenue and help to make London’s merchants rich beyond their wildest dreams.

At the end of The Seven Years War in 1764 (see ‘HM 66th Foot’ in the St Helena theme) Great Britain was confirmed as the world’s greatest power and many former French and Spanish possessions were transferred to its jurisdiction that already included large parts of India. However, the conquest of the sub-continent was not complete. The next stage of the development of the British Empire was to fortify its claim to North America and the East Indies through the growing power of the Royal Navy and the organisation of its army that would act as an imperial gendarmerie.