Sir Hudson Lowe was the hated Governor of St Helena where Napoleon was exiled,  from April 1816 until Napoleon’s death in May 1821. 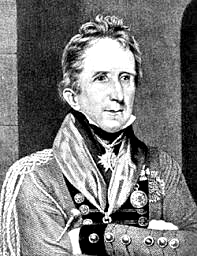 Sir Hudson Lowe was appointed by the Tory government in London led by Lord Liverpool. The Duke of Wellington was Home Secretary and the Secretary of State for the Colonies, Lord Bathhurst was responsible for the safety of the prisoner.

Lord Bathhurst insisted on a harsh regime for Napoleon’s exile.

Napoleon had been taken down to the island of St Helena from Plymouth on board HMS Northumberland in a flotilla of ships including troop transports that had set off on 8th August 1815. The ships were commanded by Admiral Sir George Cockburn, the naval commander on the Chesapeake (See also The War of 1812 on the Chesapeake in the Atlantic World topic) and one of Nelson’s heroes at the sea battle of Aboukir Bay.

When Napoleon disembarked on 17th October Cockburn was appointed temporary governor and commander in chief while awaiting the arrival of Sir Hudson Lowe on 14th April 1816. His staff included Lt.-Col. Thomas Reade, his deputy and Major Gorrequer his secretary.

There is no direct evidence for the reasons that Lowe was appointed governor but there are circumstances in his past career that suggest that he would have been considered to be a suitable candidate.

Sir Hudson Lowe had been born in Ireland in 1769 where his father was serving as an army surgeon (regimental doctor). He spent his childhood in various army posts and in 1787 was commissioned into the 50th Regiment of Foot who were stationed on Gibraltar at the time and where his father had been posted.

The 50th (Queen’s Own) was one of those somewhat ambiguous regiments raised in the 1750s in the emergency of the Seven Years war. While the Regiment fought in all the major campaigns of the next one hundred years, it never enjoyed a high profile and was disbanded and re-formed on a number of occasions as and when required.

When the wars against Napoleon and the French broke out in 1793 Lowe served in various campaigns that included the capture and occupation of Corsica. After service in the Iberian Peninsular on intelligence duties under Sir John Moore, this had led to Lowe being appointed to command a regiment of anti-Napoleon Corsican exiles, The Royal Corsican Rangers, who fought as light infantry alongside British troops in the Mediterranean.

Napoleon had a low opinion of Sir Hudson Lowe

On St Helena, Sir Hudson Lowe’s experience with troops from the island of his birth infuriated Napoleon who once said to Lowe disparagingly: “You never commanded any men but Corsican deserters. You’re not a general, you’re only a clerk.”

In 1812 Lowe returned to Britain and was sent to act as chief liaison officer to the Allied forces on the Continent where he served with Blucher. In April 1814 he carried the news of Napoleon’s abdication to London for which he was rewarded with a knighthood and in the build-up of Allied forces in 1814 he served as Quarter-Master General to the British Army of Occupation.

Whilst in France, Sir Hudson Lowe had reconnoitred the area of the approaches to Brussels over which the Battle of Waterloo would be fought the following year. He recommended the site of Mont St Jean for its defensive advantages and the farms at Le Haie Sainte and Hougoumont that formed its wings.  He had just been placed in command of British troops in Italy when Napoleon was defeated and he heard of his appointment to St Helena.

Lord Bathhurst, Secretary of State for the Colonies wrote of Sir Hudson Lowe at the time to the Duke of Wellington: “I do not believe we could have found a fitter person of his rank in the army willing to accept a situation of so much confinement, responsibility and exclusion from society.”

Up to this point in his career Sir Hudson Lowe had shown himself to have been a competent if somewhat unimaginative officer. He had risen from relatively humble beginnings and went on to command troops in battle including locally raised militia, in which it was notoriously difficult to maintain discipline. Also serving in both intelligence and logistics roles alongside the greatest military commanders of the day, he was therefore in theory an appropriate appointment. 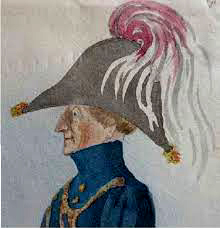 However, soon after his arrival on St Helena as its governor, Sir Hudson Lowe’s reputation began to deteriorate from which it has never recovered.

Did Lowe face an impossible situation from the very beginning?