The eighteenth century was the time when England became Britain. The disastrous civil wars of the seventeenth century in England were over. The country had a new dynasty in charge – the Hanoverians – and England’s rise to global power began. Through all the century and as England stretched its muscles, two great political parties struggled against each other for power.

However, these were not parties on the modern sense. They were more like the ever- shifting sands of what in those days was known as interest. That is, that groups of individuals who commanded great influence from birth, wealth and, in particular, connection, sought for, fought for and held power with other like-minded individuals.

All through the century, these groups held together and sundered apart driven by similar interests that were sometimes inimical with holding on to power and at other times were not.  After a time, these groups began to take on a more fixed character and became known as the Whigs and Tories. As a gross generalisation, Whigs tended to be more about change and the Tories more about stability.

However, such attitudes were always mobile and could be altered for each particular circumstance. The broad dividing lines were usually clear. They were between those who had supported the old Stuart monarchy, were likely to be favourable to the old religion and resented the adoption of the settlement of 1688 which had imported a foreign king into the country and had banished a catholic one. Religious regulation was still harsh and, for example, in Ireland, Roman Catholics were disenfranchised and could not hold commissions in the Army. This was to cause trouble throughout the century and would lead to the outbreak of rebellion at its end (see The Irish Rebellion 1798 in the Vive L’Emperor! Chapter).

Usually, Tories were against foreign entanglements and continental wars as costing too much and destabilising in their affect as taxes and armies were raised and veterans turned to highway robbery (see The Bow Street Runners in the London chapter.

The countryside became full of vagrants who were a strain on the compulsory provision of aid that fell on each Parish and crime and drinking increased in the towns and cities. Whigs favoured the expansion of trade and empire and were prepared to pay additional taxes to pay for it.

In addition to the development of the Navy, the East India Company became the most powerful trading organisation the world had ever seen with untold riches flowing back into London and the building of great houses in its suburbs. The Nabob, a returning multi-millionaire from India who settled as close to the Court in Mayfair and in Windsor, became a familiar figure and markets were opened serving every need of trade, from insurance at Lloyds to shipping at the Baltic Exchange (see The Cocoa Tree Club in the London chapter).

If economics drives advance in society, then the difference between Whigs and Tories was most marked in their attitude towards industrialisation. Generally, Tories occupied the land and were bound by it on their estates and appreciated the traditions of the countryside and their place in it.  Tories were more likely to be high Anglicans maintaining its rites of worship and doctrine.

The squire appointed the parson and was most careful to ensure that he did not stray away from his duty. Whigs, on the other hand, were more likely to be involved in capital and trade and were often also Dissenters who were banned from public office and obliged to worship in chapels, like Quakers.

As industry spread outwards from London and to the expanding cities of Birmingham, Manchester and Newcastle, powerful local family dynasties were created with names such as Barclay, Baring, Child, Hoare, Gurney and Tritton in banking and Arkwright and Brunel in industry. The country was booming in all directions helped by the construction of the canal system that revolutionised transport and its speed and the Army and Navy’s development of their purchasing systems that were needed to feed their rapid regimental and ship-building programmes and create the world’s largest industrial complexes at Weedon in the Midlands and at Chatham on the Medway. 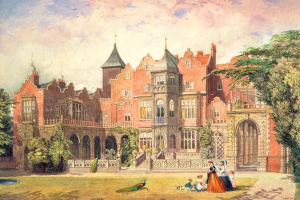 Over the century, the interests of Whigs and Tories sometimes converged but were usually in opposition and nowhere were their differences more obviously on display than in the clubs and salons of London of which Holland House was supreme.