The bloodiest mutiny in the history of the Royal Navy and the relentless pursuit of vengeance led to the war of 1812 between Britain and America, according to a book that claims to shed new light on US independence. 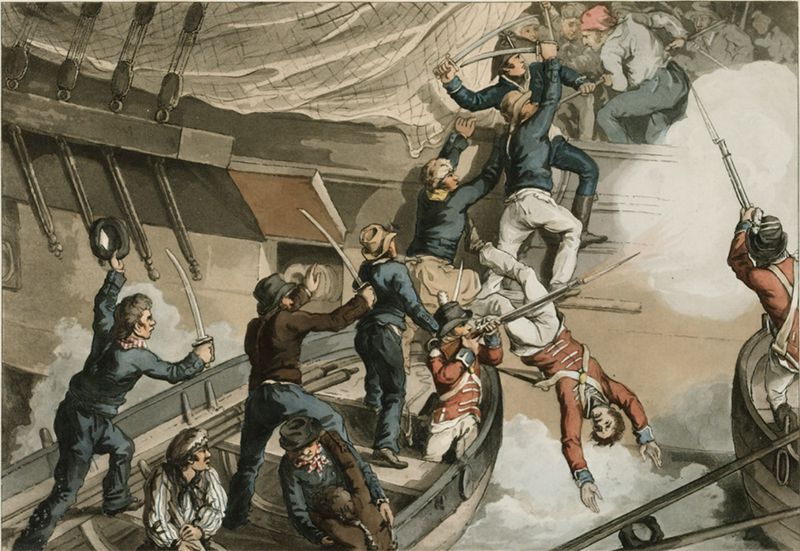 The insurrection on HMS Hermione on September 22nd 1797, was overshadowed by that on HMS Bounty eight years earlier, but had geopolitical ramifications greater than previously recognised, according to the author Angus Konstam.

The events unfolded when Hermione was patrolling in the Caribbean while Britain was at war with France and Spain. The fate of Captain Hugh Pigot and nine of his officers was sealed after the 27-year-old captain, notorious for flogging and favouritism, bellowed: “I’ll flog the last man down!” at sailors working in the rigging 50ft above the deck.

Konstam, who has researched the events for 30 years, relates how, in their scramble to comply, one man lost his footing and fell screaming. A spilt second later two of his shipmates also tumbled to their deaths.

Glancing at the broken bodies, Pigot, who “made Bligh of the Bounty seem like a pussy cat”, barked: “Throw the lubbers overboard”.

The day after the sailors’ deaths the bloodletting began. The captain’s cabin was stormed at night and Pigot and most of his officers were murdered. Some officers survived the first onslaught of cutlasses, pikes and axes only to be finished off later. Only a handful were spared.

The ringleaders made for La Guairá in Venezuela, a colony of Britain’s enemy, Spain, where they would hand over the ship and hoped to enjoy the protection of the Spanish Crown. Many adopted aliases and worked on merchant vessels.

Drawing on naval records, letters, memories and press reports, some unseen by previous researchers, Konstam describes how the Admiralty intensified a policy introduced in 1793 of stopping and searching neutral ships to find the crew and ringleaders. He estimates that there was a doubling of Royal Navy ships searching in Caribbean waters in 1797-99, with American merchant ships bearing the brunt of British boarding parties, British, and sometimes foreign, sailors found on board were pressed into the Navy’s service. By 1806, 33 mutineers had been brought to trail, with 24 hanged and one jailed.

The Hermione, renamed Santa Cecelia by the Spanish, was recaptured by the Royal Navy in 1799.

Significantly for British-US relations, the extradition from America and hanging of Thomas Nash, one of the mutiny’s ringleaders, provoked outrage in the American press, compounding anger at Britain’s heavy-handed searches. Nash, an Irishman, claimed to be an American named Nathan Robbins.

In his book, Mutiny on the Spanish Main, Constam argues that the manhunt and apprehension of mutineers on American soil brought Britain’s aggressive search policy to the attention of the American public. He agrees with previous researchers that the backlash helped Thomas Jefferson to defeat President John Adams in the election of 1800, when Adams was seen as having sacrificed “Nathan Robbins” to political expediency.

Kostam argues that as stop and search continued after the election, it fuelled resentment that came to a head after the Leopard affair of 1807, when HMS Leopard fired on and then boarded the frigate USS Chesapeake. It has been acknowledged as one of the touch papers of the War of 1812.

He said: “Thanks to public indignation fuelled by the Hermione mutiny, that resentment first reached a national audience in 1798-99. So an outcome of the Hermione mutiny was this unnecessary war between the two countries. All of this might easily have been avoided if Captain Hugh Pigot had been a less mercurial character, and less prone to acts of favouritism and brutality.

Whilst the brutality and inequity of the Royal Navy’s press system is fully acknowledged, it should also be remembered that the additional patrolling of British ships in the Caribbean was also the result of the need for more ratings to man HM ships. The Royal Navy had dramatically expanded its Fleet in the face of Spanish and French aggression throughout the world and needed extra crew.

See The War of 1812 on the Chesapeake and The Lure of Empire chapters in The Atlantic & Oriental Worlds topic and HM 66th Foot in the St Helena topic on the website.