Napoleon’s daily routine was as might be expected of a military man and consisted of work, recreation and conversation. 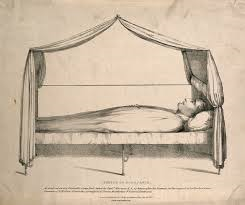 He had always been austere in his habits learned after a lifetime of campaigning and slept on a narrow iron bedstead. Like all good soldiers, he was particular about his personal hygiene and appearance and shaved himself daily. His first act of the day was to go outdoors either for a walk around the garden or ion horseback. At ten o’clock he had breakfast before starting work which was focused on the writing of his memoires. 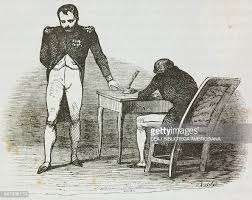 He allocated each period of his career to a different member of his household and they sat around him in the billiard room each at his own writing table taking his dictation as Napoleon paced up and down, hands clasped behind his back. When this process ended, Napoleon took his bath which was an important part of his day. An ancient boiler heated up water which was then fed through pipes to his bath. Napoleon’s bath was a place of sanctuary. He spent long hours in it relieving the aches and pains of a body that had carried him through numerous campaigns in many places over a long period of time and as his health broke down his pains were eased.

The ships carpenter of the Northumberland, Mr. Cooper, had made a book stand that fitted over the bath which Napoleon used to read books and magazines. 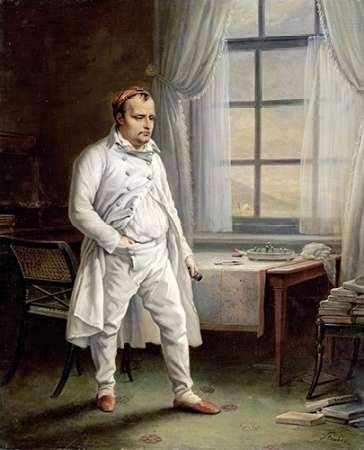 After his bath, Napoleon dressed and prepared himself to receive visitors.

Everyone who was anyone wanted to meet him. These included the officers of the garrison, from both the army and navy; civil and military officials; the doctors appointed to supervise his health and, more than any others, a continual stream of foreign visitors on their way to and from British India. All visitors were obliged to obtain a pass from the governor’s office. Napoleon was a lively and inquisitive host and his conversation wide-ranging. He was, after all, a world figure holding strong views and with unbounded knowledge of government and society. A number of these encounters involved the governor, Sir Hudson Lowe, and were the cause of continual disagreement between the two (See also ‘Troublemaker’ in this topic).

Later in the afternoon, Napoleon either went for a walk in the garden or rode out in his barouche or on horseback around the Longwood estate. These expeditions caused great trouble to the British as Napoleon liked to play hide and seek with the British Orderly officer stationed at Longwood and led eventually to tight restrictions being imposed on his movements.

At the dinner hour which was usually at around seven, but could be later, the whole household changed for dinner which was served by footmen in white britches. A strict seating protocol was observed by the ladies and gentlemen of the company with Napoleon seated in the centre of the table with Madame de Montholon on his right. This procedure was designed personally by Napoleon to maintain the idea of his status as emperor of the French who had been crowned by the Pope. After dinner he often insisted on reading aloud to the assembled company before retiring to his room between eleven o’clock and midnight.

Money – who would provide it and what it would be used for – was a continual source of dispute from the day that Napoleon arrived on St Helena. Whilst the British had agreed with its allies that it would be responsible for costs, were not prepared to sponsor extravagance. Napoleon had other ideas and expected to maintain his lifestyle as he had in France. His household numbered over forty including men, women, children and servants and they all had their own ideas about what they were due.

Napoleon had gone on board the Northumberland with over 4,000 napoleons hidden in his luggage but this did not last long and very soon he was looking around for more. He still had deposits in Paris but there became increasingly difficult to obtain. Funds first had to transferred from Paris to London before Letters of Credit could be issued in St Helena.

All of this took time and money at the same time as Napoleon’s expenditure rose to £20,000 which was almost double the sum allocated by London to the governor of £12,000 per year.

A particular source of grievance was the consumption of the provisions supplied to Longwood by Balcombe’s agency holding the supply contract. The monthly costs were running at over £2,000; the cellar alone supplied seven bottles of champagne or Graves, one bottle of Madeira and six bottles of table wine on a daily basis. In addition, a bottle of Cape red wine was supplied for each servant.

This situation was aggravated by the rumour that wines and spirits were being sold to British soldiers and civilians from the back door of the kitchens at Longwood. This further inflamed opinion in London and on St Helena.

Napoleon retaliated to the tightening of British policy by announcing that he would cut up his silver plate and auction it in Jamestown. In addition, his family and supporters in France were encouraged to forward funds to him.

Napoleon had been used to a rich table and was known for his love of food. Although Governor Lowe had sent to the Cape for additional supplies totalling forty bullocks and five hundred sheep every two months, food was often short. There were over 3,000 men serving in the garrison in addition to the permanent inhabitants who numbered around 4,500.

St Helena had been occupied by the British to provide foodstuffs for the passing of both naval and civilian ships but its gardens that were managed by the East India Company had not been designed to cope with these numbers. The soil was heavy and the winters long; only common vegetables like cabbage and peas could be grown.

Throughout Napoleon’s exile on St Helena Longwood House was the focus for all that happened. Longwood provided the motivation for Napoleon’s resistance to the British regime in many different ways.

The house had been poorly built and was quite unsuitable for the numbers who lived there.

It was cold and draughty in winter and stifling in summer. It was impossible to be rid of the rats that infested the rafters.

There was no privacy for Napoleon or the members of his household who were obliged to live cheek by jowl.

The guards around the house and grounds could see everything that was going on inside except when Napoleon deliberately hid himself or put on disguise.

Longwood has always been central to the story of Napoleon in exile on St Helena.