Throughout the time of Napoleon’s imprisonment on St Helena, the Army employed a Regiment of Foot on guard duties.

Initially this was the 53rd (Shropshire). Their 2nd Battalion sailed in the Northumberland with Napoleon in 1815 before going on to serve in India. The main military force, that served for longest and carried out the bulk of the duties, was the 66th (Berkshire) Regiment of Foot. Its 2nd Battalion sailed directly from England and its 1st Battalion was transferred from Ceylon.

Once on the island the two battalions were amalgamated and the Regiment was based at Deadwood Camp. Like the civilian community on the island, opinion was divided about Napoleon and his treatment. For example, Lt. Col Lascelles who commanded in 1817 was sent home by Governor Lowe for being implicated with the Irish doctor, O’Meara, in allowing secret communication between Longwood and sympathisers in London. Likewise, a Lt. Birmingham was court-martialled, dismissed the service and returned to England following accusations of drunkenness and ‘conduct unbecoming’.

One of the most onerous and tiresome duties of the 66th was to provide an Orderly Officer at Longwood whose orders were that he should be able to observe Napoleon physically at least once each day. A series of officers fulfilled this role including Poppleton (53rd), Blakeney and Nicholls (66th) and Lutyens and Crokat (20th). This check was to ensure that he remained where he should be. The officer was then ordered to hoist a blue flag that could be seen from the Governor’s residence at Plantation House indicating that he prisoner had not escaped. A red flag meant that he had gone missing. A cat and mouse game was played between Napoleon and the Orderly Officer and on one occasion a member of the staff at Longwood disguised themselves as Napoleon and rode out of the grounds. 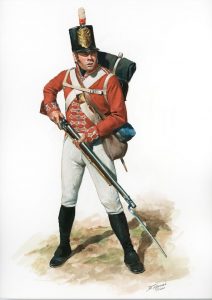 Maintaining discipline was never easy. The climate was harsh and variable with extreme cold from the Antarctic in winter. Rations were restricted and unappetising with cattle having to be imported from the Cape to feed the troops at high cost. Entertainment was rudimentary with only donkey racing relieving the monotony of tedious and repetitive duties either around the perimeter at Longwood or on mobile patrol. Guard duties were organised by day and by night, seven days a week. The troops were banned from Jamestown for drunkenness and fighting in the streets.

Governor Sir Hudson Lowe was not responsible for the British Navy on the island whose commanders reported directly to the Admiralty in London that caused continual friction with Lowe. The Navy’s captains were sympathetic towards Napoleon and he held him in high regard. Whenever a new ship arrived its officers were always welcomed by Napoleon in audience at Longwood when he would question them closely on their record and opinions. The first Admiral commanding, Sir George Cockburn, took a hard line on Napoleon’s conditions but his successor, Admiral Sir Pultney Malcolm enjoyed close relations and the Admiral and his wife dined frequently at Longwood. 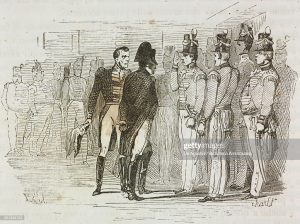 There were nine ships of the Island Squadron whose duty it was to guard the approaches to the island. All in-coming vessels were ordered to heave-to before being boarded. Their cargo was inspected and their passenger lists were checked.  From time to time the Navy was alerted to vessels whose intent might  be hostile. 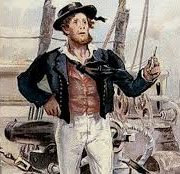 One such vessel was an American privateer, The Damned Yankee, that had achieved notoriety in the War of 1812 (See also ‘The war of 1812 on the Chesapeake in the Empire of the Oceans topic and ‘Escape’ in the St Helena topic). The schooner was known to have circled St Helena flying the Red Duster of the British merchant marine and, when chased, had raised the Stars and Stripes at its masthead and sailing away. 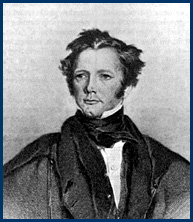 One of the Navy’s captains at St Helena was Frederick Marryat who had served with Sir Thomas Cochrane, known as the Sea Wolf, in the Napoleonic wars. Marryat captained HMS Beaver, sketched Napoleon’s body as it lay at Longwood after his death and later became a novelist and the author of Midshipman Easy and Children of the New Forest.

One of the more extraordinary features of life on St Helena which involved all the principal actors throughout Napoleon’s exile and imprisonment was the role of a series of doctors who attended on the emperor at Longwood.

The British were obsessed with the idea of being blamed if Napoleon should become ill or die whilst he was in their hands. A total of seven doctors were involved in keeping check on Napoleon’s health and it became a major cause of dispute between Napoleon and Governor Sir Hudson Lowe.

The first doctor to be appointed was the Irishman O’Meara who became so close to Napoleon that he was accused of collusion and removed. Dr. Verling was never even allowed to examine Napoleon and was replaced by Dr. Antommarchi, a pathologist, who Napoleon once remarked he ‘would not trust to cure his foot’.

Next came Dr, John Stokoe of the Navy who incurred Governor Lowe’s displeasure in the same way as O’Meara. Stokoe was followed by Dr. Francis Burton, surgeon to the 66th who was one of the doctors present at Napoleon’s death and famously created the emperor’s death mask.

By the time of Burton’s appointment Napoleon had become seriously ill and was suffering from cancer of the stomach. He spent more and more of every day in the bath or in bed and he lost his appetite.

Dr Matthew Livingstone succeeded Burton. Livingstone was an East India Company doctor on the island and was responsible for the health of Napoleon’s household at Longwood. He assisted at the births of a number of children born in the house and was present at Napoleon’s post-mortem.

The last of the doctors was Dr. Thomas Shorrt who was the East India Company’s resident surgeon on the island. He did not meet Napoleon face to face but was often consulted by Sir Hudson Lowe about Napoleon’s health. On the emperor’s death, Shorrt was responsible for the official post-mortem report that has been controversial from that day to this in its analysis  of the cause of death.