However, Napoleon’s health continued to be a problem. He became fatter; his legs and ankles swelled and his gums were inflamed. He spent an increasing amount of each day in the bah as a way to soothe his ills and, for the first time in his life, had two teeth extracted.

Sir Hudson Lowe had appointed Dr. John Verling to be O’Meara’s replacement at Longwood but Napoleon had refused to be treated by him.

Verling was an Army surgeon serving with the artillery detachment and was therefore under suspicion by the household. Instead, a young naval surgeon, Dr. John Stokoe was invited to attend on Napoleon. It was Sir Hudson Lowe’s bad luck that Stokoe confirmed O’Meara’s diagnosis of hepatitis and prescribed a variety of cures that included bleeding and various other treatments.

The reality was that the medical science of the day did not have the knowledge to be able to do much for the patient. In the meantime, in September 1819 a party had arrived from France to replace a number of members of the Longwood household who had returned to Paris.

Amongst them was Dr. Antonio Antonmarchi, a pathologist and friend of the Bonaparte family. Napoleon had a low estimation of Antonmarchi’s skills as a physician but valued him as a friend. In early 1820, he discussed his own health in general terms and referred to his father’s death from a tumour of the stomach. The pains in his stomach grew worse; he spent more and more time each day easing himself in a warm bath and rested for most of the day.

Napoleon continued to resist any proposal made by Sir Hudson Sir Hudson Lowe for the appointment of a British doctor to look after his health needs. He believed that they were all the Governor’s spies and incompetents and it was not until early 1821, the year of his death, that Napoleon allowed Dr. Arnott, surgeon to the 20th Foot to visit him at Longwood.

For a time, Arnott was indifferent to the pain that Napoleon was obviously experiencing but he soon changed his mind and diagnosed cancer of the stomach.

By April 1821 Napoleon was seriously ill and often delirious.

On the 4th May, his pulse was erratic; his skin cold to the touch and his eyes only half open and the doctors in attendance doubted that Napoleon would survive the night.  On Saturday the 5th May Napoleon opened his eyes from time to time and at 5.49pm he died. A severe storm raged outside. 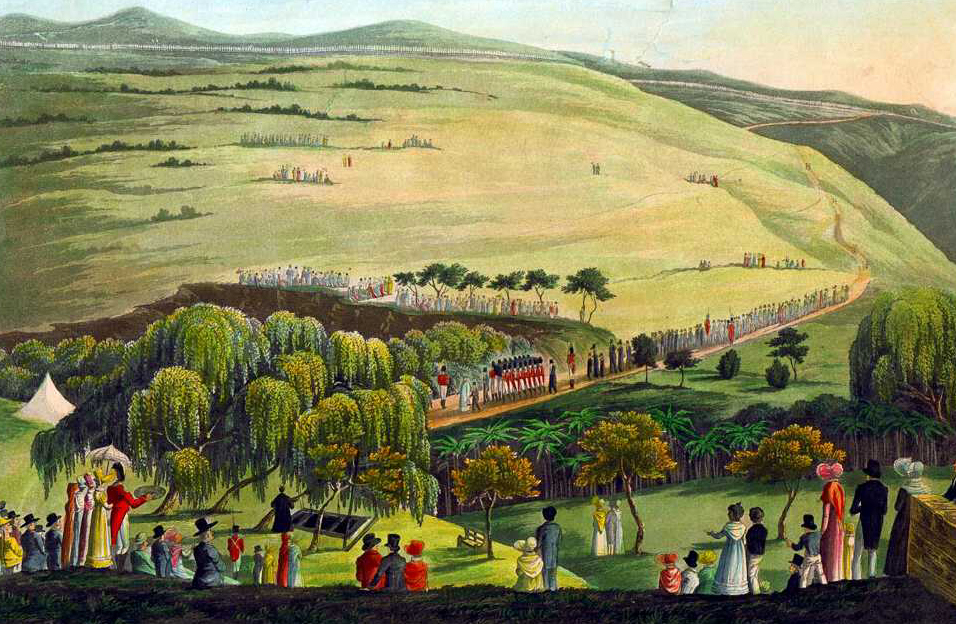 The following day the dignitaries on the island came to pay their respects and in the afternoon a post-mortem was carried out.

Afterwards, Napoleon was dressed in his favourite green uniform with his tricorn hat on his head. His heart was removed but Sir Hudson Lowe insisted that it should be buried with his body. The Governor wanted no hostages to what could become a cult.

Large numbers of the civil and military population came to pay their respects at Longwood House.

On the 7th May, Napoleon’s body was placed in a triple-lined coffin made of tinplate, mahogany and lead and a deep grave was dug lined and reinforced with stone.  On the 9th May Napoleon’s funeral took place in a favourite spot of Napoleon’s with as much ceremony as was possible. 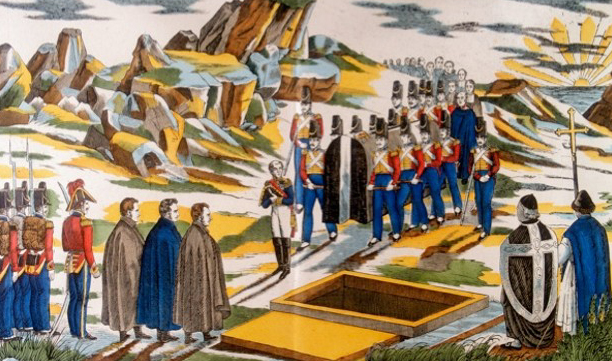 His coffin was carried in procession by the grenadiers of the 66th Foot, the island’s guard regiment, behind which followed a large number of mourners.

It was a sad end to the life of a man who had changed the face of Europe and who would always be remembered.