Throughout the eighteenth century the Company was changing significantly. Formerly the Company had focused on trade and its development. Now, it had ambitions to become the territorial master of the whole of India – to create an empire in the East. If there is one name that was most closely associated with the rise and rise of the East India Company, it was that of Robert Clive (1725-1774). Clive was born in Shropshire to a lawyer with thirteen children.

The boy was a thoroughly difficult child and as soon as he was old enough his father shipped him off to India as a Company writer where he would sink or swim. He started work for the Company in Madras as a clerk in 1744 but soon showed himself to be an able leader and over three separate periods of service in India between 1744-1760, Clive became its absolute master. At the Siege of Pondicherry in 1748; the occupation of Arcot in 1751 and the Battle of Plassey in 1757, Clive routed vastly superior local forces. At Plassey, for example, his force of 1,100 European soldiers and 2,100 Sepoys outwitted an enemy army of 18,000 horse and 50,000 Foot.

Clive’s greatest triumph was not, however, on the field of battle but in trade negotiations. He persuaded the Mogul Emperor – as much by blackmail as by other means – to hand over to the East India Company in a Firman, or document, the whole of the trading rights of the Deccan on an exclusive basis – at that time the largest populated area on the sub-continent. The Company became the virtual ruler of thirty million people and gained an additional £4 million (£32.4 billion) in annual revenues. Clive’s reward was a pension of £38,00 (£308 million) a year for life. When criticised, He declared to his friends “I stand astonished by my modesty”!

The Company’s empire continued to expand and its trade now incorporated China where it declared a monopoly on its sales of opium and encouraged the taking of the drug by the population. The Company had also become a by-word for corruption on a grand scale. The whole Company and all of its staff participating at every level in one gigantic and scandalous scheme of grand larceny. Clive’s personal fortune was estimated at £180,000 (£1.5 billion). The Company was plundered and its shareholders were shorn.

Throughout all of this time, the Company’s need for ships to service its trade in the East grew until each year between 68-85 bottoms were in use each year. As vessels sailed on only three or four voyages before they were worn out, this meant that between 14-20 new bottoms were put down annually. Whilst most were built in yards on the Thames at Chatham, Woolwich and Deptford, a few were built each year on the Hooghly River at Calcutta.

Indian family shipbuilders had a fine reputation for sturdy ships that were well made and used teak timbers instead of English oak. They were known as country ships. By 1813 a total of 19 such ships had been built in the East for use by the Company’s Maritime Service. In 1791, when the Company was at one of its greatest periods of expansion, 36 ships of over 1000 tons each and 40 ships of 800 tons sailed to and from the East.

The larger ships served the China trade with their lighter cargoes of tea. The usual tussle between the Company and the owners took place before a keel was laid and the shortage or surplus of freight space at the time determined the price that was negotiated for the vessel when completed. Usually both parties managed to maintain their monopolies! 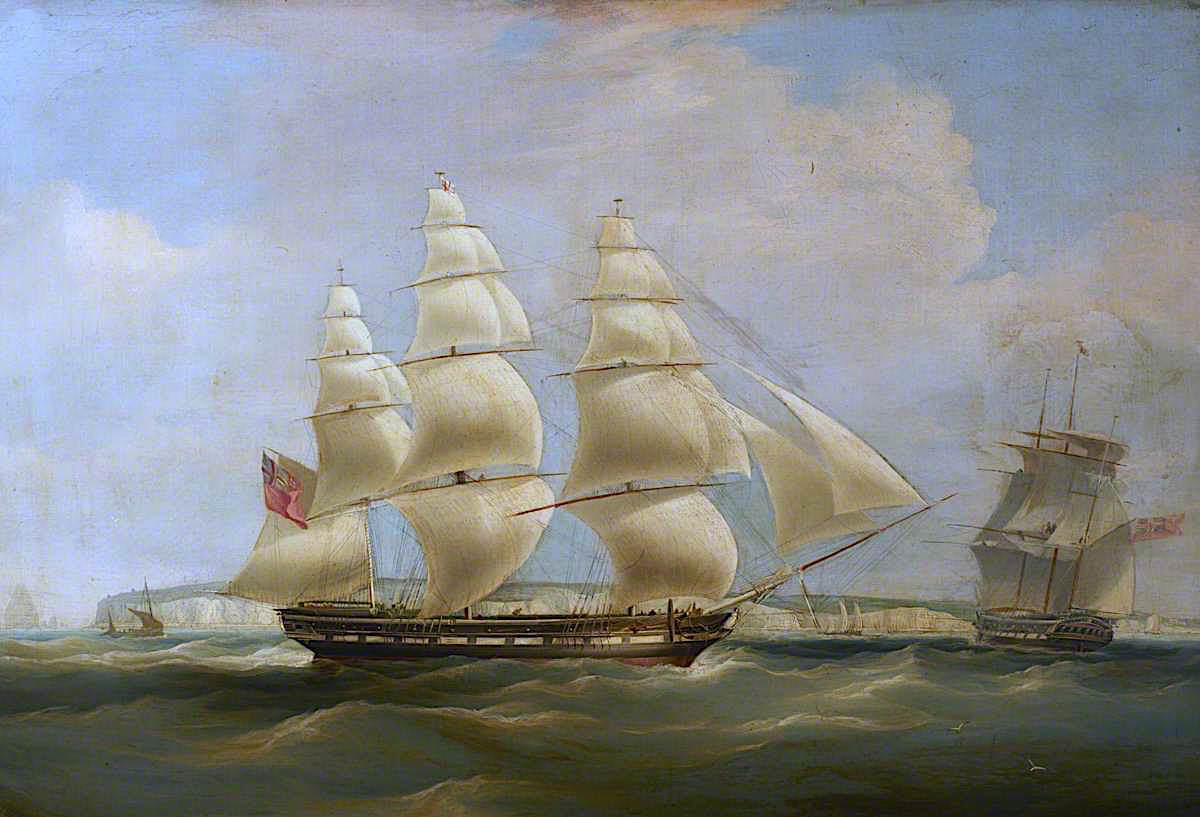 The main features of the ships were that they got larger as confidence in their design became more assured and that they were built to be very sturdy. They were large because this maximised their freight carrying capacity and they were sturdy to withstand the extreme weather conditions that they could encounter and the possibility that the would be attacked. It was a long voyage to the East that lasted at least eighteen months for the round trip and every kind of weather condition could be expected including the annual monsoon season.

An additional requirement was that all the Company’s ships should be able to defend themselves against attack at sea either by hostile nations, for example, the French or Dutch navies, or from pirates who were always active in the Indian Ocean and the Arabian Sea. This meant that all the Company’s ships were fully armed with at least one if not more gun decks. In return for their protection, the Royal Navy expected the Company’s vessel to be at its disposal during times of war and also relied on the Company’s well trained sailors to fulfil the needs of the Press for extra hands.

The ships took on the appearance of men of war although they were not so robust. Gun ports were often stopped with cargo and instead of a crew of over 300 on a warship, the Company’s vessels had no more than 150. Sometimes false portholes were painted on their ships sides to deceive their enemies. When the Company was formed, its ships were between 300-400 tons and were always kept below 499 tons so that they did not have to carry a chaplain which would have increased costs.