The Aristocrats of the Seas

The Company’s fleet was considered to be the finest in the world; its ships were described as ‘the finest ships that ever sailed on the high seas’ and a vast industry developed along the Thames where the ships were built. In addition to the slipway, each yard had its foundry for making anchors and nails; a spinning house for making cordage; storehouses for timber and canvass; a slaughter house, salt house and barrelage for preparing victuals; and a powder mill where gunpowder was made from saltpetre brought back from the settlement of Surat in Gujarat.

By the 1750s ships were being made at a fast rate. On December 22nd 1747, a contract between builders and owners was signed by the owner’s husband for a 620 tons ship that would be built in John Perry’s yard at Blackwall out of oak drawn from the Company’s stocks of timber at Reading and brought down the Thames by barge.

The senior captains of the East India Company’s vessels became the stars of their day and Nathaniel Dance was one of their most famous. He came from what might now be described as the merchant-gentleman class that rose to prominence in the late seventeenth century and reached its zenith in the eighteenth. As Pepys had been to the Navy, so Dance was to the Company. 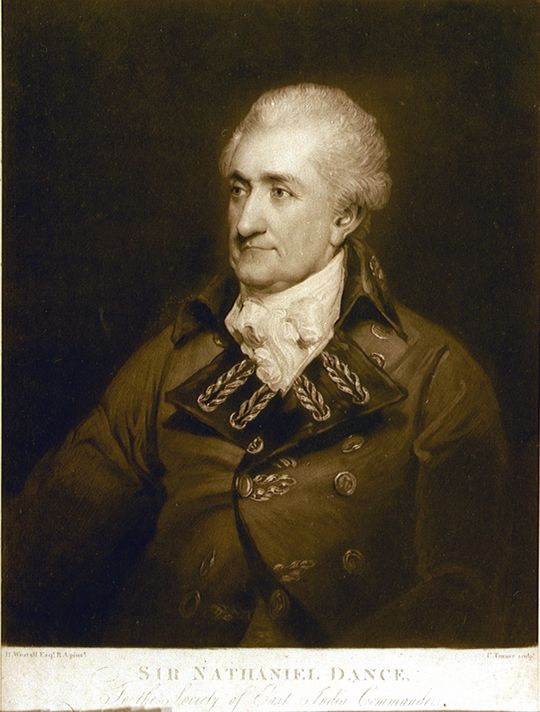 Dance was a member of a class that was industrious, worthy, talented, ambitious and Protestant. He was above all, a Londoner. Dance was the nephew of a well-known society portrait painter, Sir Nathaniel Dance Holland (1735-1811) who is best known for his portrait of Captain James Cook (1728-1779) shown examining a map of the world on his knees (See ‘Empire of the Oceans’ in the The Atlantic World topic). 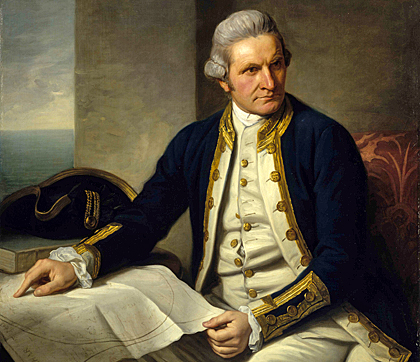 The family was connected with the Hollands (See ‘The Holland House Set’ in the London topic) and were wealthy which was needed as purchasing a captaincy of a Company vessel was very expensive and cost c.£5,000 (£40.5 million).

By the late eighteenth century such positions had become virtually hereditary and after four voyages, captains could sell the goodwill of their command and retire in luxury for the rest of their lives. As usual in the Company, a number of very young men of means who were completely inexperienced began to be appointed to command who had been sponsored by their relatives but this practice was stopped by the Court after a number of disasters at sea.

Thereafter, young men were obliged to sail on one or two voyages as mates before assuming their command. Their purchase was considered to be a piece of property like any other and could be bought and sold to a relative, friend or to another syndicate. On appointment, however, the captain became subject to the owner’s supervision and the regulations of the East India Company.

The Company’s captains enjoyed a very high status in its hierarchy and this was shown by the honours that were given to them at sea and in port. Whenever their ship arrived in harbour they received a nine-gun salute and the guard was turned out. A house was hired for them in town in which they lodged at the expense of the Company and where daily rations were provided. From this location they could go about their business purchasing private goods to carry home for profit in their private freight space. From China this would include fans, carvings, lacquer, chinaware and opium, all of which were immensely popular in England. They also participated in the social round and were entertained by the local Governor in is residence.

Being a Company captain was no sinecure; it was an immense responsibility and there were many perils on every voyage. A very high level of investment was required into ships, crews and trade goods on each voyage. The venture was a hugely risky and uncertain undertaking in which death caused by scurvy and dysentery were common. Finding fresh water was always hazardous; attack by other ships was frequent and the regional weather to be passed through was uncertain and often violent.

Captains needed to have a cool head in a crisis and to be able to handle themselves; their crew and their ship in any number of unforeseen situations. Over time, a number of distinguished mariners emerged, amongst the best known of whom was Captain Nathaniel Dance (1748-1827), the Company’s senior captain. In January 1804, Dance set off in a convoy of merchantmen out of Canton in China making their way back to England. Dance, as a senior and well-respected captain of the Company’s maritime service, was appointed the Acting Commodore of the homecoming Fleet. 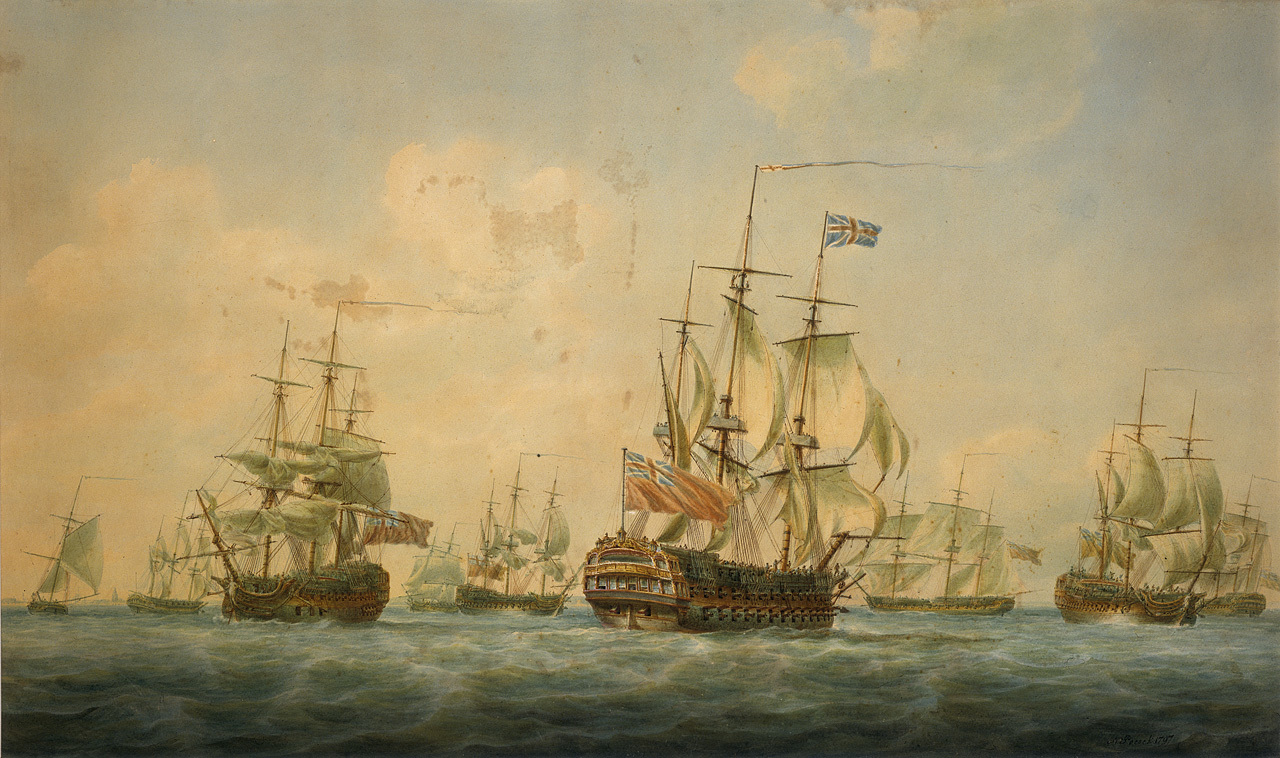 There were eleven country vessels and sixteen East Indiamen in the convoy and the fleet that had been assembled was the richest ever worth carrying freight homeward worth over £8 Million (£6.5 billion). The convoy had no escort, except for an armed brig, the Ganges, which was fast but lightly armed and would be no match for Men of War. Likewise, the merchantmen were all well supplied with cannon but would not stop a hostile and fully armed fleet if it decided to attack. French war ships were known to be in the area and on February 14th, suspicious sails were sighted at the entrance to the Straits of Malacca in the South China Sea, between Indonesia and Malaya. On investigation, the ships were indeed French, including the Marengo, 74 guns and four other ships and they were intent on theft and murder.

Dance now organised a subterfuge.  He ordered his ships into line so that their gun ports were shown off towards the enemy with best advantage and that they should hoist the red ensign which implied that they were warships of the Royal Navy. Dance also ordered the fleet to increase to its maximum speed and appear to flee. When they had done so and the French had attacked, Dance turned his most powerful ships around, including his own the Camden, and fired a broadside at close range into them. The French fled and the convoy was met later by British warships and escorted as far as St Helena and safety.

The island had been leased by the Crown to the East India Company as a re-victualling station in the South Atlantic in the early days of the Company (See ‘Civil and Military’ in the St Helena topic).

On his return to London, Dance was feted by the City of London for his exceptional leadership that had prevented the loss of the Fleet and its cargoes and driven off the hated French. Hereceived a reward of £5,000 (£40.5 million) from the Bombay Insurance Company together with an annual pension of £500 (£4 million); a plate, a vase and a ceremonial sword.

A year ago I was out at supper with friends and noticed a glass cabinet on the wall. The cabinet contained Captain Dance’s original presentation sword! It was a family heirloom.